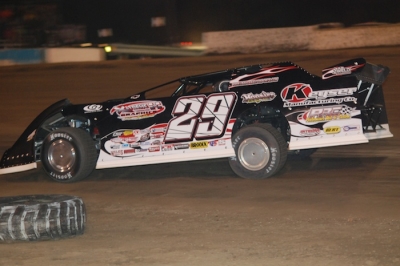 The polesitting Lanigan got the jump on Dave Hess Jr. of Waterford, Pa., on the start of the 40-lap UMP DIRTcar-sanctioned race, then kept Hess and later Mark Whitener of nearby Middleburg, Fla., at arm’s length on his way to a $5,000 victory. Whitener scored the runner-up finish ahead of Brandon Sheppard of New Berlin, Ill. Hess was fourth with Billy Moyer of Batesville, Ark., rounding out the top five in a race slowed by two cautions.

Winning in his first-ever trip to North Florida, Lanigan, the defending World of Outlaws Late Model Series champion, eased the disappointment of his subpar performances in the WoO-sanctioned Winter Freeze doubleheader at Screven Motor Speedway in Sylvania, Ga., Friday and Saturday.

“We don’t ever give up. We try hard every night and just keep trying harder,” said Lanigan, who debuted a new Rocket Chassis at North Florida after finishes of sixth and eighth at Screven. “We brought out a new piece tonight and it was fast. We tried some different things on it and it seemed to like it.”

Making just his second Super Late Model start, the third-starting Whitener slipped by Hess on a lap-14 restart and looked to challenge Lanigan around the race’s halfway point. But Lanigan flexed his muscle in the second half of the race, opening up a half-straightaway advantage on the 4/10-mile oval.

“I just tried to keep on pushing it as hard as I could to see what we could do,” Lanigan said. “The car just got better and better. The harder I ran it, the better it got.”

A few lapped cars came into play in the final laps, but Whitener was unable to close the gap. He instead had to fend off a late challenge from Sheppard, who closed to Whitener’s rear bumper on the final lap but couldn’t find a way around.

Whitener, who has dominated his home region’s Crate and Limited Late Model action in recent years, scored the runner-up finish in just his second Super Late Model start. The solid performance matched his finish in his Super Late Model debut during Saturday’s Battle of the Swamp event at Waycross (Ga.) Motor Speedway.

“We had a great car tonight,” Whitener said. “At one point in that race, we were right there with Lanigan. That makes us feel good as a team. We come out here and work hard. It’s great to come out and get two second-place finishes in two races. We’re on a high, that’s for sure.”

After riding in fourth for much of the race, Sheppard’s used a late charge to get by Hess and reel in the two leaders in the race’s closing laps. But his bid to win was cut short.

“My car definitely was getting better every lap,” Sheppard said. “I wish there would’ve been a few more laps. It would’ve been fun to see what happened.”

The race was slowed by a pair of cautions. The first appeared with 13 laps complete when Steve Skipper of Hilliard, Fla., slowed in turn two. The second yellow flag waved one lap later when Scott Phillips of Marlette, Mich., spun in turn three.

Notes: Lanigan’s Rocket Chassis is powered by a Cornett Racing Engine with sponsorship from Keyser Manufacturing, Gotta Race and Performance Rod & Custom. … Lanigan was one of three World of Outlaws regulars competing in the event. Chub Frank of Bear Lake, Pa., was never a factor in finishing ninth, while Tim McCreadie of Watertown, N.Y., scratched from the event after a hard wreck in hot laps that left his car heavily damaged. McCreadie wasn’t injured. … North Florida’s race was the fourth event on the 19-race Georgia-Florida Speedweeks schedule and the first in Florida. East Bay Raceway Park in Gibsonton, Bubba Raceway Park in Ocala and Volusia Raceway Park in Barberville, each host events over the next two weeks.

After burning up a right-rear tire on his way to winning the second heat race, outside polesitter Dave Hess Jr. is worried tire wear could be an issue in the feature. He’s even more worried because he has little experience running the UMP tire rule. Normally, Hess would rely on advice from his fellow racers in tire selection, but he’s worried he won’t fine much help there after his impressive heat race run. “I’m sure none of them are gonna want to help me now,” he said. … Darrell Lanigan’s run from fourth to first in the first heat started with a pass that involved contact in getting by Billy Moyer for third. There was some drama between the two drivers late last season when Lanigan used some contact to get by Moyer on his way to a $20,000 WoO victory at Berlin Raceway, but neither driver was bothered by tonight’s heat-race scuffle. “I don’t mind it when he’s that much faster and drives on off from me,” Moyer said. “It’s when you’re the same speed and racing each other like we were that last time that it bothers me.” Lanigan was even less concerned. “It got tight down there, but that stuff happens,” he said. … Fast qualifier Mark Whitener was kicking himself after his heat race, feeling as though his mistake gave the race to Lanigan. He’s confident he can make up for it in the main event. “We’ve got a good car, so I think we’ll be pretty competitive with these guys. Hopefully I can put on a show.” … Brandon Sheppard wasn’t happy with Dave Hess Jr. after the second heat race, saying that crowded him on the first lap. Sheppard said he was forced to hit an infield tire in order to avoid hitting Hess, which bent down the nose of his car. … Billy Moyer’s crew is planning some major setup changes for the main event after a disappointing heat race run. “We’re definitely not where we need to be,” said the seventh-starting Moyer. “We’re gonna throw some stuff at it and see what happens, but this really just isn’t my kind of place. That running wide open with all that wheel spin isn’t really my style.”

Dave Hess Jr. outdueled polesitter and fellow front-row starter Brandon Sheppard in the early laps and pulled away for a victory in the 10-lap second heat race. Sheppard and Hess appeared to touch briefly on the frontstretch just after taking the green, with Sheppard's car getting briefly squirrelly. He recovered and ran side-by-side with Hess for another lap or so before Hess edged away. Sheppard finished second, a straightaway ahead of third-finishing Scott Riggs, who overcame a poor qualifying effort. Gregg Satterlee was fourth as everyone transferred to the main event.

Darrell Lanigan, starting outside the front row but slipped back to fourth, came alive after the halfway point and roared to a 10-lap victory. Lanigan overtook polesitter Mark Whitener on the seventh lap and led the rest of the way, taking the checkers a half-straightaway ahead of Whitener. Christian Augspurger, who overtook Lanigan and Billy Moyer on the backstretch early in the race, was third while Moyer settled for the fourth spot in the caution-free prelim. The rest of the field finished far behind.

Tim McCreadie’s night at North Florida Speedway ended almost as soon as he began with a scary accident during hot laps. The Watertown, N.Y., driver got into the slime at the end of the straightaway, and suddenly realized he was headed straight for the turn-one wall. At the last second, McCreadie attempted to avoid the wall by going off the track via the pit exit, but he wasn't able to get the car turned in time. | Video

His No. 39 ended up slamming the wall where it begins in turn one with the left-rear corner of his car, breaking off a large chunk of the concrete. The contact sent his car spinning down the pit exit road, where he hit the railing that runs along side the road again with the left side of the car. Fortunately, no one was standing near the exit. McCreadie quickly climbed from the car uninjured, but later reported minor back soreness.

He wasn't happy with the track conditions for hot laps, telling one official that cars shouldn't have been out there with the track as wet as it was.

After the wreck, McCreadie decided against pulling out a backup car. His crew began stripping everything off the wrecked car, which had its rear end broke in half where the left-side tube goes into the gear housing.

Whitener tripped the clock at 17.55 seconds and will start on the pole for the first of two heat races. Brandon Sheppard of New Berlin, Ill., who turned a 17.62-second lap, starts on the pole of the second heat.

The night’s 40-lap feature pays $5,000-to-win. Besides Late Models, UMP modifieds are in action along with the track’s pure stock and box stock divisions.

Sunday marks the second straight day a non-traditional Georgia-Florida Speedweeks event has failed to draw enough cars for a full starting field; Waycross (Ga.) Motor Speedway drew 15 cars for a $10,000-to-win show Saturday. ... North Florida Speedway co-owner Phil Guadagno hoped to draw some of the local Limited Late Models for the event, but none entered and only three Florida drivers are among the 16 entries. ... North Florida last hosted Speedweeks events in 1998 when Leslie Essary of Crane, Mo., and Greg Skinner of Oxford, Ala., grabbed Northern Allstars Late Model Series victories in Terry Eaglin-promoted events. ... The track put cars on the track for practice starting just after 5 p.m. after a nearby church wrapped up its evening services. ... Heat races are only scheduled for Late Models and modifieds; the modified feature is first followed by the Late Model feature, then the lower divisions. ... As with many Florida tracks, there's lots of sand in the surface.