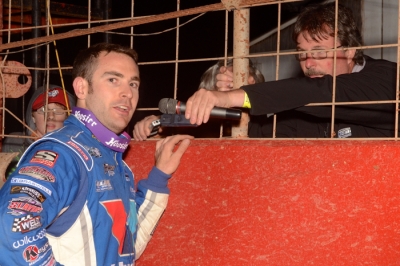 The returning two-time champion was never headed after passing Mike Marlar of Winfield, Tenn., for the lead on lap six, but the outcome was in doubt all the way to the checkered flag. Richards had to contend with heavy lapped traffic and a hungry Clanton over the final circuits to register his 40th career victory on the WoO tour and collect $10,150. | Complete Speedweeks coverage

Richards, 24, drove his Valvoline-sponsored Rocket across the finish line with a slight 0.405-second edge on the 37-year-old Clanton, whose bid to sweep the season-opening WoO weekend in the Kennedy Motorsports Capital Race Car fell one spot short. Both Richards and Clanton recorded finishes of first and second in the doubleheader at the three-eighths-mile oval, sending them to the next tour events in Florida deadlocked for the points lead – the circuit’s first tie atop the standings since Richards and Tim McCreadie shared the position after the 11th race of the 2010 season.

Marlar, who started second and led laps 1-5, settled for a close third-place finish in the Bryson Motorsports Rocket. He fell back as far as fourth before rallying to race within striking distance of the leaders during the event’s final stages.

Dale McDowell of Chickamauga, Ga., advanced from the sixth starting spot to place fourth in the Team Dillon Warrior mount and WoO Rookie of the Year contender Eric Wells of Hazard, Ky., scored a career-best tour finish of fifth after starting 13th in a Team Zero by Bloomquist machine.

Richards, who left the WoO last spring to move south and compete on the NASCAR Nationwide Series, plans to chase the World of Outlaws title again this season as he continues pursuing a NASCAR ride opportunity. He made clear his championship worthiness by refusing to fold under Clanton’s intense pressure during the 29-lap run of uninterrupted green-flag racing that closed the A-Main.

“I knew Clanton’s been really, really good and we had a lot of tire chatter the last five or six laps, so I knew he was gonna be trying to come,” said Richards, who moved within one victory of tying defending WoO champion Darrell Lanigan of Union, Ky., atop the tour’s alltime win list. “We just had to try and stay on the infield and try to keep the right-rear out of the black – and just try to hold on. I think a few more laps he probably would’ve gotten us, but it was just enough.

“Last night we ran second but we just didn’t feel that great, so we just kind of went back with what we know for the heat race. From that point on the car just picked up and I knew we had something to try to win tonight.”

Richards, who started third, celebrated his first-ever triumph at Screven. He had finished as high as second in his four previous WoO starts.

Clanton, who started fourth, got the nose of his car underneath Richards’s several times and nearly ran into the back of Richards’s machine when he charged off turn four to begin the final lap, but he couldn’t pull off a pass.

“My strategy was to just go in the corner as hard as I could and hope I’d stick,” said Clanton. “We rubbed a little bit coming to the white flag and Josh done what he should’ve done – just protect the bottom.”

Clanton wasn’t disappointed in his performance, however. Leaving Screven with a share of the points lead put him in a nice frame of mind.

“It’s a great start to the season,” said Clanton. “We’re excited to be where we are.”

Four caution flags slowed the A-Main. Three were for slowing cars: Casey Roberts of Toccoa, Ga., on lap three, Clint Smith of Senoia, Ga., on lap 13 and Scott James of Bright, Ind., on lap 21. The only tangle came on lap 14 when James and Chub Frank of Bear Lake, Pa., stacked up in turn one due to scramble ahead of them.

Marlar was fastest in Ohlins Shocks Time Trials with a lap of 14.133 seconds. It was his fourth career fast-time honor on the WoO.

Heat winners were Marlar, Richards, McDowell and Fuller. The B-Mains were captured by Lanigan and Tim McCreadie of Watertown, N.Y.

The WoO now heads to Florida for a pair of tripleheaders. The Bubba Army Late Model Winter Nationals runs from Feb. 15-17 at Bubba Raceway Park in Ocala, and the 42nd UNOH DIRTcar Nationals Presented by Summit Racing Equipment at Volusia Speedway Park in Barberville includes World of Outlaws programs on Feb. 21, 22 and 23.