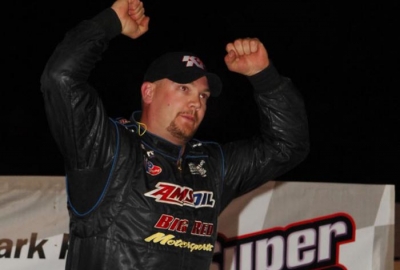 "It's been a long-time coming," the 30-year-old Smith said in victory lane. "Darren Miller is a great race car driver and he pushed up their a little bit in turn two and we were able to get around him."

Bart Hartman led the first lap until Miller, who was driving a Victory Circle M1 Chassis by Moyer for just the second time this year, took the point on the second lap. Miller then led until Smith, who started third, made a mad dash past Miller on the restart just before the race's midway point.

Smith withstood five caution flags over a 10-lap period in holding on for the victory.

Notes: Winner Brady Smith's Bloomquist Race Car is powered by a Vic Hill Racing Engine and sponsored by AMSOIL, Big Red Motorsports and Mid-States Equipment. ... Smith's win made him the eighth different winner in the first 12 Lucas Oil Series events in 2008. ... The race was slowed by 11 cautions. ... Among drivers failing to make the feature: Jason Feger, Jeff Walston, Dylan Thompson, James Ward, Frank Heckenast Jr, David Gentry and Ronny Lee Hollingsworth. ... Friday's action at KLMS was canceled because of severe weather. ... The series heads to Lucas Oil Speedway in Wheatland, Mo., on May 9-10 for the Super Clean Diamond Nationals, a $40,000-to-win event.