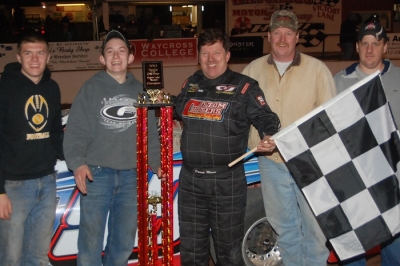 WAYCROSS, Ga. (Feb. 9) — Hall of Famer Donnie Moran has heard critics who dismiss him as washed up. And those critics might have felt vindicated in the early laps of Saturday’s Crosby Cadillac GMC Battle in the Swamp at Waycross Motor Speedway as the 50-year-old Moran, starting outside the front row, quickly dropped back to a distant fourth. | Blog | Complete Speedweeks coverage

But Moran didn’t fret over the three-car breakaway of Eric Jacobsen, Billy Moyer and Ross Bailes, and after falling nearly a half-lap behind the lead pack, he slowly reeled them in late in the race, aware that everyone’s tires might not last the 50-lap distance on the gritty 4/10-mile surface.

“When I grew up racing, this is my 35th year anniversary of racing, and I used to race a lot of NDRA races down South here, and you had to have tire management,” said the driver from Dresden, Ohio. “Some of my experience paid off.”

It paid off to the tune of $10,000 in the unsanctioned event as Moyer (lap 42), Bailes (lap 48) and finally Jacobsen (lap-48 restart) blew tires over the final nine laps, opening the door for Moran to grab his first Georgia-Florida Speedweeks victory since 2007.

The often subdued Moran was jubilant in victory lane in front of a big crowd, gratefully thanking his sponsors and soaking up the late-race drama of a race that was mostly ho-hum with single-file racing through the first 40 laps.

“Then they kept blowing tires, and I was just biding my time and biding my time,” Moran said. “And I didn’t know it was that close to the end, and when we went to restart, something must’ve happened to Eric’s tire, too. I’ve gotta say thanks to American Racers, because ours lasted the whole distance.”

Eighth-starting Mark Whitener of Middleburg, Fla., followed Moran toward the front during the final laps and notched a second-place finish, one of his best open-competition engine performances of his career. Chris Madden of Gray Court, S.C., was third, Billy Moyer Jr. of Batesville, Ark., was fourth and Bailes, of Clover, S.C., salvaged a fifth-place finish after running second or third most of the race before his blowout.

Whitener, a regional standout familiar with Waycross, was glad to finish second, although he wished he’d have started a little closer to the front in the smallish 15-car field.

“We had a fast car all night. We just kinda, I made a mistake in the heat race, and it got me back there in the field,” he said. "At the last, those guys went with a little softer tire, and we went with a little harder tire, so we were hopefully waiting on them to blow tires — and they ended up blowing tires toward the end of the race.”

Although Whitener has more laps at Waycross than the traveling drivers, he shrugged off any edge.

Jacobsen, scored seventh in the final rundown after just six cars took the checkers, was heartbroken in missing his first five-figure victory.

“It’s not the conversation I wanted to have with you tonight,” the Santa Cruz, Calif., driver said with a wry smile. “I thought after practice last night we had a good car, and we qualified well and handled things in the heat race. We had the track position and I really gotta kind of look back, when I was following those lapped cars, I was sliding the car around a little bit, maybe protecting the bottom a little too much.”

Sliding the car around wore the tires too much, and when he came up to speed for the final restart, his right-rear let go. “That was the race,” he said.

“It’s the best start I’ve ever had coming down here,” he said. “So it’s all smiles and we go on down to Tampa Bay here and we’ll get back after it. We’ve got good equipment right now and our guys are doing a good job. The driver’s just gotta do a little bit better to get to the checkers first.”

The man who got to the checkers first at Waycross was smiling even bigger.

“You know, people say I’m old and washed up,” said Moran, whose son Devin had a flat tire and finished 10th. “I love to race and I’m trying to teach my kids to race so we can keep this sport going. But when you can win a Speedweeks race starting off at the beginning of the year, and beat some of the competitors that was here, you can’t say enough about it. I’m just speechless.”

Notes: Moran’s MasterSbilt Race Car is powered by a Malcuit Racing Engine and sponsored by Custom Cutters, Eddie’s Sunoco, Bazell Race Fuels and All About Wraps. ... Moran’s previous Georgia-Florida Speedweeks victory came Jan. 31, 2007, at Golden Isles Speedway in Brunswick, Ga. .... His most recent Florida victory came Feb. 7, 2004, at East Bay, where he’ll race next week before heading to six more nights of action at Volusia Speedway Park in Barberville, Fla. ... Brandon Dewitt of Morven, Ga., won the Hedman Husler National Late Model Series feature and $4,000; Cecil Eunice won the track’s Limited Sportsman feature. ... The track ran out of parking and those arriving last were asked to park in the adjacent Okefenokee Fairgrounds. ... Cale Simons finished third in the second heat race, but flames shot from under his car’s hood on the cool-down lap. The fire was quickly doused and Simons was able to start the main event; he finished ninth. ... Eric Jacobsen, who led 48 of 50 laps, car doesn’t appear to have a number on his all-black car, but his No. 5 shows up when a camera flash is used. Manual scorers might have an issue, but “as long as we’re on transponders, they shouldn’t” mind, Jacobsen said. ... The 15 entries were six fewer than 2012, when Jonathan Davenport won; Davenport didn’t compete this year. ... The track has been slightly reconfigured for 2013 with the infield being pushed out in turns three and four, forcing drivers to use a little extra finesse to maneuver through the narrowest part of the oval. ... The Super Late Model portion of the action was officiated by the Lucas Oil Late Model Dirt Series, but the race was unsanctioned.