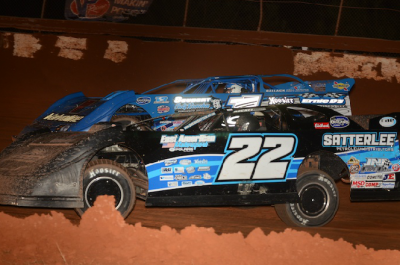 SYLVANIA, Ga. (Feb. 8) — Entering Friday’s Winter Freeze event at Screven Motor Speedway, Gregg Satterlee of Rochester Mills, Pa., didn’t have much reason to believe the night would go very well for him. His limited experience at the 3/8-mile oval had been mostly a struggle, so why would Friday’s event, which served as the season opener for the World of Outlaws Late Model Series, be any different?

“I was only here one other time and we weren’t very good,” said Satterlee, whose only previous appearance at Screven produced a 27th-place finish in last year’s Winter Freeze. “Then we tested Wednesday night and not very good at all. Actually, we were about a second off the pace.” | Complete Speedweeks coverage

But a few setup adjustments for Friday’s race, which was also the first race of the 19-race Georgia-Florida Speedweeks schedule, and Satterlee was much improved. In fact, he was one of the fastest cars all night. He qualified third-fastest overall, finished second in his heat race, then claimed a solid fourth-place finish in the 40-lap main event.

“We came back tonight and changed the car around,” said Satterlee, who ran third early in the race and even challenged for second before slipping back a spot midway through. “My crew chief Robby Allen helped out a lot and put the right changes to the car and we had a solid night. We had a good car at the beginning of the race, but I was just trying to drive the car too hard and heated up my tires. Still, we’re real happy with a fourth-place finish.”

While the setup changes were a substantial part of Satterlee’s improvement, they were only possible because of the previous experience Satterlee and his team had at Screven.

“I think a lot of running well down here is being familiar with the track and knowing what to do to the car,” Satterlee said. “We didn’t have much to go on last year, but now we’ve got some notes and stuff and we were able to make the right adjustments tonight.”

If familiarity with a track is key to success, Satterlee could be headed for a solid Speedweeks. In his first-ever Speedweeks trip last year, Satterlee was up-and-down between events at Screven, Bubba Raceway Park in Ocala, Fla., and Volusia Speedway Park in Barberville, Fla., but he did manage to record one top-five finish and a pair of top-10s. Just like his second appearance at Screven was much improved on his first race last season, Satterlee is hoping to improve when he makes his second visits to Ocala and Volusia later during his Speedweeks trip.

“We’re going to these tracks and we’re more familiar with them now,” Satterlee said. “We had a couple good runs (last year), but it’s way nicer to go back to a track for a second time. You know the track a little bit and you’ve got something to fall back on.

“We ran good at Ocala and we were OK at Volusia. But we’ve got our program a lot more straightened out at this point, so we’re expecting to do much better.”

The strong performance in Friday’s Speedweeks opener has Satterlee excited about the possibilities of the rest of the trip.

“Last year we made like four or five races out of 11, so I wanna make like eight or even all of them,” Satterlee said. “That’s a pretty big step, just to make most of the races, but I’d like to get a couple top fives, and we’ve already got one. A win would be great, and I think we can do it. We’ve just gotta be smart and I’ve gotta race smart, then we’ll see what happens.”

After some offseason shuffles, Scott James of Lawrenceburg, Ind., was worried he may be without a ride to start the 2013 season. But a last-minute deal involving James, former car owner Ron Powell and chassis builder Sanford Goddard landed James in Goddard’s Warrior Race Cars house car just in time to head south for Speedweeks.

The combination got off to a hot start Friday night, with James advancing from his ninth starting spot to finish third in the World of Outlaws event. After facing the possibility of missing Speedweeks just a few weeks ago, to open the trip with a top-five run was almost like a dream for the veteran racer.

“I feel like I need to be pinched right now,” James said. “This deal came together awfully quick. Sanford and all those guys at the shop worked their butts off getting these cars ready and my guys. It’s pretty special and I’m happy as heck.”

Along with Goddard and the Knoxville, Tenn.-based Warrior team, the new team was made possible because of financial assistance from Powell, who served as James’ car owner for a number of years including his seasons of national touring on the Lucas Oil Late Model Dirt Series. James is more than happy to have Powell back on board with a team that he believes has a lot of opportunity.

“I asked him to come back — basically begged him,” James said. “He said ‘only on a serious deal.’ This is serious. So he’s back and I’m happy. I just gotta thank everybody that’s involved.”