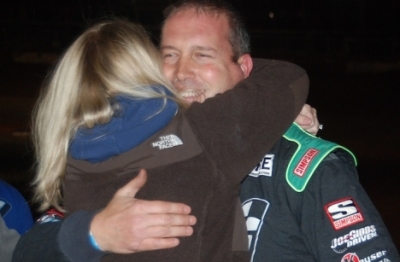 Shane Clanton gets a hug from wife Michelle after winning at Screven. (DirtonDirt.com)

Racing in front of his home-state fans, the 37-year-old driver from Fayetteville, Ga., roared off the pole position to lead the entire distance in the Kennedy Motorsports Capital Race Car. He was never seriously challenged en route to pocketing $8,050 for his 17th career WoO triumph and first in the tour’s lidlifter. | Complete Speedweeks coverage

Two-time WoO champion Josh Richards of Shinnston, W.Va., finished second in the Rocket Chassis house car, 1.439 seconds behind Clanton. The 24-year-old star moved up from the third starting spot to run in the runner-up position for all 40 circuits.

Clanton, who finished third in the 2012 WoO points standings but won just a single A-Main, had plenty of reasons to smile after his dominating performance. But it seemed he was most satisfied about putting a cherry on top of his car owner John Kennedy’s already unforgettable day.

As Clanton was traveling to Screven on Friday afternoon he learned that Kennedy’s wife had just given birth to twins – boy Grady and girl Keegan – in the couple’s hometown of Phoenix.

“We had a special gift today – our car owner had two babies,” said Clanton, who is in his second season driving for Kennedy Motorsports. “It’s special to dedicate this win to them. The babies’ mama said, ‘They need shoes already, so get up on the wheel.’”

Clanton did just that, controlling the race from start-to-finish. Unlike last year’s Winter Freeze at Screven, he didn’t let a pole position start slip through his fingers.

“We looked in our notebook and didn’t do what we did last year,” said Clanton, who slipped backward at the start one year ago and settled for a disappointing fifth-place finish. “We did the opposite of what we did and it was good.

“This is the third year on our (Capital) car, so the more races we run, the better we can judge what we need to do at certain times and what we need to do for adjustments. Right now me and (chief mechanic) Jonathan (Owenby) are jelling pretty good at what we need to do to the car. We worked on a lot of stuff over the winter and have gotten better.”

Clanton would love for Friday’s performance at the 3/8-mile oval to serve as a harbinger of a big season ahead.

“I hope it’s one those years like Lanigan had (in 2012),” said Clanton, who sits atop the WoO points standings for the first time since he briefly held the spot after the seventh race of the 2009 season. “He started his year out with a win here last year so hopefully I can do the same thing.”

Richards, who plans to return as a WoO regular this season after leaving the tour early last year to compete on the NASCAR Nationwide Series, was satisfied with his second-place run.

“Clanton was definitely better,” said Richards. “I was just a little free. We experimented with a lot of stuff tonight and I feel like we had a really good car, but it’s hard when you try new things and don’t know how far to go. It’s a brand-new car and it felt great, but we just kind of maintained where we were all race, just held onto our track position. We gotta figure out what the car likes a little more.”

Two caution flags slowed the race. On lap one outside polesitter Dale McDowell of Chickamauga, Ga., slid sideways between turns one and two due to a broken left-front suspension, setting off a chain-reaction pileup that left Sweeteners Plus teammates Vic Coffey of Caledona, N.Y., and Tim McCreadie of Watertown, N.Y., crashed together and unable to continue. Later, on lap 12, Dan Stone of Thompson, Pa., stopped on the inside of turn one.

Thirty-nine cars were signed in for the start of the 10th WoO season under the World Racing Group banner.

Richards was fastest in Ohlins Shocks Time Trials with a lap of 14.352 seconds. It was his 32nd career fast time honor, moving him within one of York, Pa.’s Rick Eckert on the tour’s all-time list.