At I-44, Babb matches Bowyer with big victory 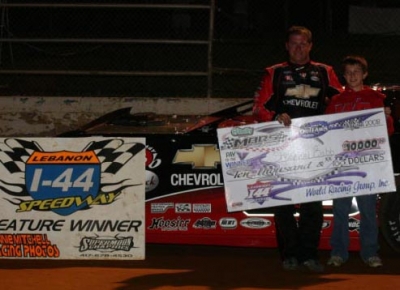 LEBANON, Mo. (May 3) — Shannon Babb gave his boss even more reason to smile on Saturday night. On the same night that his famous car owner Clint Bowyer was triumphant in NASCAR Sprint Cup competition at Richmond (Va.) International Raceway, Babb authored a flawless drive to victory in the World of Outlaws Late Model Series All-State Insurance 40 at I-44 Speedway. | Slideshow

Babb, 34, of Moweaqua, Ill., advanced from the fourth starting spot to pass Rick Eckert of York, Pa., for the lead on lap 12 and then never looked back. Driving a new Traiger Grills-sponsored Rocket car that had never before seen action, Babb repelled a late-race challenge from Eckert and Billy Moyer of Batesville, Ark., to score his first WoO win of the 2008 season.

Mere moments after hoisting an oversized novelty check commemorating his $10,000 victory in an event that was co-sanctioned by the O’Reilly MARS DirtCar Series, Babb learned that his high-profile car owner had also scored a big Saturday-night short-track win. “We got back here to the trailer just in time to watch Clint run the last lap and win at Richmond,” said Babb, who is in his first season as the hired-gun of Bowyer’s fledgling dirt Late Model team. “He’s gonna be tickled to death when he hears that we won him a Late Model race tonight too.”

Eckert, who started from the outside pole and led laps 1-11, settled for a $5,100 runner-up finish in Raye Vest’s GRT car, 1.423 seconds behind Babb. Moyer finished third in his Victory Circle M1 chassis, followed by 11th-starter Wendell Wallace of Batesville, Ark., in the GRT house car and Clint Smith of Senoia, Ga., in the Cliburn Tank Lines GRT, who started eighth but had to gather himself after losing several spots in the race’s early laps.

With Babb’s Clements-powered car purring along to perfection once he gained command, the WoO title contender correctly felt that the race was his to lose. “Not very often do you get a car that feels that good,” said Babb, who registered his seventh career WoO A-Main win. “Tommy (Grecco) and Jay (Hunt) did a great job putting it together and I had 100 percent confidence in it.”

Babb’s only anxious moment came following a lap-26 restart, when Eckert and Moyer stayed close for several circuits. Eckert came within inches of leading lap 28 before Babb gradually opened up some breathing room.

“During that (lap-26) caution those guys probably caught their breath a little and got up on the wheel to try to go for it one last time,” said Babb. “So I had to get back going again hard too.”

After Brian Birkhofer of Muscatine, Iowa, slowed on lap 36 with a flat tire while running fifth to bring out the race’s fifth and final caution flag, Babb wasn’t threatened when the green flag returned.

“That last restart, I wasn’t gonna let nobody by me,” said a smiling Babb, who registered his first career win at Lebanon I-44 Speedway after running well but experiencing bad luck in several previous appearances. “I just put it on the floor.”

Eckert, 42, was close enough to taste his first WoO victory in nearly two years, but he fell short. “I left my car just a little bit too free,” said Eckert, whose last WoO win came 65 races ago, on July 8, 2006, at Sharon Speedway in Hartford, Ohio. “I tightened up some for the feature, but I still left myself just a little bit too free on exit. If I got in the corner hard and got back in the gas, I got loose. After that long (lap-26) caution the racetrack came back, and I got four good laps and was even able to get door-to-door with (Babb) for two laps. But then his (harder) tire got going again and I was done. I tried everything I could try to win, but I just couldn’t get ‘er done.”

The 50-year-old Moyer, meanwhile, remained atop the WoO points standings with a steady, solid run to third place. He sniffed the lead in the battle after the lap-26 restart, but he wasn’t quite good enough to win for the fifth time in eight events this season.

“Shannon was committed to the top and Eckert to the bottom more or less,” said Moyer, who started seventh. “I could run through the center of one and two real quick, but Eckert was swinging way out wide there so I had to let him in a couple times or we would’ve crashed. If I could’ve just got a little bit farther up, I might have been able to get by him. But really, we were just a little bit off.”

The race’s five caution flags were all for minor problems, including a turn-two spin by Jeremy Payne of Springfield, Mo., on lap seven; right-rear flat tires on the cars of Chatham, Ill.’s Brian Shirley (as he ran fifth on lap 12) and Shane Clanton of Locust Grove, Ga. (lap 25); series rookie Vic Coffey of Leicester, N.Y. (left-front suspension woes on lap 26); and Birkhofer.

Notes: Clint Smith established a new track record during time trials, rounding the 3/8-mile oval in 13.626 seconds for his first WoO fast-time of the season. ... Shane Clanton broke a rocker arm in his engine winning a consolation race and went to a backup car for the feature. ... Josh Richards of Shinnston, W.Va., who entered the event ranked second in WoO points, used his first provisional since 2006 after slapping the homestretch wall during the first heat. His crew worked up until the start of the feature pace laps repairing the car. ... The series is in action tonight at Monett (Mo.) Speedway, which, like I-44, is promoted by Randy Mooneyham.