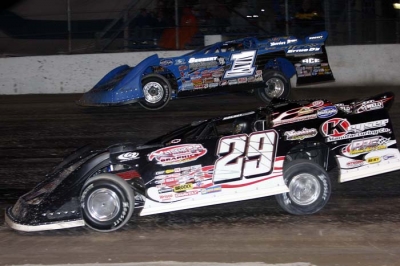 As the 2013 World of Outlaws Late Model Series campaign kicks off Feb. 8-9 with the Winter Freeze doubleheader at Screven Motor Speedway in Sylvania, Ga., here are 10 burning questions to consider about the national tour’s 10th season under the World Racing Group banner:

What impact will the return of Josh Richards have on the series? There’s little debate on this topic. Richards’s announcement that he’s returning as a World of Outlaws regular is the circuit’s biggest development heading into 2013, a revelation that figures to be a major factor in the trajectory of all that happens this year. | Complete Speedweeks previews

A 24-year-old superstar from Shinnston, W.Va., whose last four seasons as a WoO follower produced two titles (2009-10) and a pair of runner-up points finishes (2008, 2011), Richards left the series that carried him to national stardom early in ’12 to move south and compete on the NASCAR Nationwide Series. He picked up valuable track time with 14 Nationwide Series starts and one Camping World Truck Series appearance, but finding a quality, full-time NASCAR ride has proven to be a difficult task so he’s back with his father Mark’s iconic Rocket Chassis house car operation.

“I’ve been fortunate with the opportunities I’ve been given (in NASCAR), but it’s just so hard to find that major sponsor and solid team that will allow you to race every weekend. We’re not losing sight of that goal, but I love to race — racing is my life — so I’m going to go race where I can and right now that’s on dirt.”

Can Darrell Lanigan repeat his historic 2012 season? The 42-year-old from Union, Ky., concedes that it will take a supreme effort to even approach his mesmerizing ’12 stats, which included numerous WoO records (15 wins, six consecutive victories, three 100-lap triumphs, points leader from start-to-finish) and earnings of $426,700. In addition, with Richards back in the game, Lanigan will be facing off with the driver who was his biggest rival for victories during the 2010-11 seasons.

The dynamic duo combined to register another sterling win percentage of .425 in 2012, but Richards was responsible for only two of their combined 17 triumphs in 40 races. Richards, of course, entered just 13 events, so Lanigan kept their combined win percentage above 40 percent almost single-handedly, gobbling up those checkered flags he had shared with Richards during the two previous seasons.

Did Rick Eckert’s strong finish in 2012 signal that he’s ready to put up a big win total this season? Eckert, 47, of York, Pa., recorded two wins, a second and a third in the last five races of 2012. Only a rare DNF due to a mechanical problem in the season finale at Charlotte prevented him from heading into the off-season with five consecutive top-five finishes.

With five victories and a solid runner-up finish in the points standings, Eckert was clearly the No. 2 man to Lanigan in ’12. If he can carry that momentum over to ’13, the 2011 WoO champion just might have the goods to threaten his personal single-season high in wins (eight, in ’06) and battle for the title.

Is Shane Clanton ready to contend for the championship in his second year with Kennedy Motorsports? Clanton, 37, of Fayetteville, Ga., finished third in the 2012 points standings, but he would be the first one to admit that it didn’t feel like he had a third-place-in-points type of season.

In his first season driving for Kennedy Motorsports and just his second campaigning a Capital Race Car he designed with former racer Marshall Green, Clanton never found the consistent strength he was seeking. He showed flashes of brilliance, but his single victory, 11 top-five finishes and season-ending 466-point deficit to Lanigan in the standings were not statistics normally associated with a third-place finisher in the WoO points battle. In the eight previous WoO seasons the driver finishing third in the points standings averaged five wins and 18 top-five finishes and never was more than 198 points behind the champion.

Clanton feels good about his chances in 2013. Now well settled with Kennedy Motorsports, he enters this month’s action with a victory already under his belt (last month he scored a $10,000 Winter Extreme win at Arizona’s Tucson International Raceway) — not to mention well aware that his best stretch of ’12 was the season-opening swing to Screven, Bubba Raceway Park and Volusia (four top-fives, five top-10s in six events).

Will Tim Fuller return to the WoO headlines in his first full season running for Kennedy Motorsports? No driver will unload at Screven with a better vibe surrounding him than Fuller, who has never been so excited to start a WoO campaign. His frustrating, uphill struggle to compete on the tour with his own cash-strapped team ended last July when car owner John Kennedy hired him to be Clanton’s teammate, giving the 45-year-old from Watertown, N.Y., an opportunity to race top-notch equipment without financial worries.

Coming off a pair of unsanctioned January victories in Arizona, Fuller looks primed and ready for a bounce-back season. Whether he can match his career year of 2009 (seven victories, fourth in points) is up for debate, but the consensus opinion seems to be that his 98-race WoO winless streak (last checkered flag: June 17, 2010, at Merrittville Speedway in Thorold, Ontario) will end in ’13.

Can Tim McCreadie maintain the mid-season strength he showed in 2012 for the entire ’13 schedule? From early May through mid-July last season, McCreadie appeared for all the world to have his Sweeteners Plus Warrior car figured out. He enjoyed a sizzling stretch of action, winning three times and ripping off nine consecutive top-five finishes (not even Lanigan matched that total in ’12) and 16 straight top-10s (tied with Lanigan for the most in that category). He also rose from eighth to third in the points standings.

But McCreadie, 38, of Watertown, N.Y., couldn’t maintain that championship-caliber pace. He slumped badly over the final 15 races of the season, absorbing eight DNFs and scoring just a single top-five finish (second place in the finale at Charlotte). If McCreadie blasts out of the ’13 starting gate like last year’s May-July T-Mac, he’s a title contender.

Can Chub Frank and Clint Smith snap long winless streaks on the WoO after flirting with victory several times in 2012? The two WoO veterans enter ’13 with extended absences from victory lane — Smith is winless in 63 races, Frank in 122 — but secure in the knowledge that a checkered flag is not out of reach.

Smith, 47, of Senoia, Ga., came agonizingly close to victory twice last season, finishing second to Lanigan on both occasions. And considering that he scored seven of his 10 top-five finishes during the second half of the schedule, his program appears to be on an upswing entering ’13.

Frank, 51, of Bear Lake, Pa., finished as high as second last season. His 10 top-five finishes matched his total from the previous two years combined, proving that he’s ready to get back in the winner’s circle for the first time since 2009.

Will Bub McCool avoid a sophomore slump and improve on a 2012 season that was arguably the best ever for a Rookie of the Year award winner? The 35-year-old from Vicksburg, Miss., made his mark as a first-time Outlaw, winning at Tazewell (Tenn.) Speedway while registering nine top-five finishes and finished seventh in the points standings. The experience he gained traveling to so many new tracks has him bullish about his chances for increased production in ’13.

Will Pat Doar and Kent Robinson get off to good enough starts to continue down the road with the World of Outlaws in 2013? Doar, 49, of New Richmond, Wis., entered the 2012 season with high hopes after winning Rookie of the Year honors the previous year, but his campaign was a nightmare. He scored just two top-five finishes and finished a disappointing 10th in the points standings. This year Doar is banking on better performance with a new Capital Race Car at his disposal. But he doesn’t find better results, he’s made it clear that he’ll have to reevaluate his program.

Robinson, 25, of Bloomington, Ind., will take a similar approach as Doar into the 2013 season. After battling through blown engines, hard crashes and other frustrations to complete the entire WoO schedule last season and finish second in the Rookie of the Year standings, the rising youngster is hoping that he’s gone through the school of hard knocks and will elevate his game this year.

Will this year’s Rookie of the Year battle be the closest in WoO history? That’s a good possibility with three generally evenly-matched drivers — Morgan Bagley of Longview, Texas, Eric Wells of Hazard, Ky., and Dillon Wood of New Smyrna Beach, Fla. — approved as Rookie of the Year contenders.