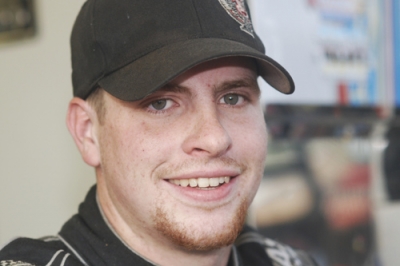 From the outside looking in, Austin Hubbard’s racing program may not appear any more stable now than it was a year ago. If that were true, it would be bad news for the Seaford, Del., driver, who set out with plans of contending for the Lucas Oil Late Model Dirt Series rookie title in 2012 only to drop off the series mid-season.

While a plethora of engine woes was the main culprit in his failed attempt to follow the Lucas Oil tour, Hubbard admits that his program wasn’t nearly as prepared going into 2012 as it needed to be in order to take on the daunting task of follow a complete national tour.

The former World of Outlaws Late Model Series Rookie of the Year was back with his family-owned team for the first time in two years after car owner Dale Beitler decided to retire following Hubbard’s sophomore campaign on the Outlaws tour in 2011. A hurried effort to prepare his own program for a switch to the Lucas Oil tour — although he had some help from car owner Tim Logan — left Hubbard significantly underprepared for the season, attributing to his early departure from the Lucas tour.

This offseason has seen plenty of more changes for Hubbard’s team. And while to some that may suggest that his racing program is as unsettled as it was at the start of last year, Hubbard is confident that he has things headed in a much different direction.

A chassis switch to MasterSbilt Race Cars will no doubt take some time to adjust, but organizationally, Hubbard believes he is much more prepared to start the new season as he plans a return to the Lucas Oil Series. Along with his new cars, Hubbard’s program upgrades include an improved engine program and two full-time crew members in former racer Andy Anderson and Chris Edwardson.

“I think we definitely have a better grasp on what we’re doing and I think being more prepared is a big part of that,” said Hubbard, whose Speedweeks plans include this weekend’s World of Outlaws-sanctioned Winter Freeze at Screven Motor Speedway in Sylvania, Ga., and Lucas Oil’s season-opening Dart Winternationals next week at East Bay Raceway Park in Gibsonton, Fla. “We’re definitely headed in a better direction. We’ve got a better inventory to go and do the whole thing. If the motors will stay together and we don’t have any major problems, then I’ll think we’ll be able to compete with those guys.

“I’ve got two people helping full time this year instead of one, which with one’s pretty tough. It’s strenuous on me and the one other person that’s helping. It’s a tough deal to try to travel on a national tour with just one guy, so I’m definitely glad to have two guys this year.”

For his Speedweeks trip, Hubbard has also enlisted the help of noted setup up guru Huey Wilcoxon, whose MasterSbilt by Huey program has led to a number of notable drivers in the mid-Atlantic region finding success in MasterSbilt cars. With his program in much better shape and the added help of Wilcox, Hubbard is confident he’ll have a successful Speedweeks.

“It might take a little bit trying to get used to the new car, but as far as I can tell, they’re really good cars,” Hubbard said. “MasterSbilt has a really good program and I’ve got one of the best guys that works on them and builds them with me. There’s really no excuse not to run good and win a race and I’m not coming there with any expectations other than to win.” — Joshua Joiner

From Australia to Florida

Two Lucas Oil Late Model Dirt Series drivers got a jump on Speedweeks action by competing in dirt races Down Under during the offseason. Reigning series champion Jimmy Owens of Newport, Tenn., and Steve Francis of Ashland, Ky., both found success in feature racing action in Australia during recent action.

Francis took a month-long trip to Australia and led every lap in all his events for car owners Michael Holmes and Bruce McKenzie.

Francis kicked off the Wild West Tour on Dec. 26 at Perth Motorplex in Kwinana, Western Australia, capturing the opening preliminary feature and following it up with a main event victory the next night.

Francis then ventured to Manjimup Speedway in Middlesex, Western Australia, on Dec. 29 for another victory and wrapped up the Wild West Tour title by winning at Collie Speedway on Jan. 5.

Owens raced at Mountain Dew Ice Raceway in Hobart, Tasmania, driving a David Nichols-owned car. Owens piloted the USA No. 1 car and won the Jan. 26 preliminary feature, following that up with a 50-lap victory the following night. In Feb. 1-2 action at Bendigo Bank Arena in Latrobe, Australia, Owens started third in the main event but mechanical problems forced him out.

Francis and Owens will kick off the 2013 Lucas Oil Series season on Feb. 10-16 at East Bay Raceway Park near Tampa, Fla., for the 37th annual Dart Winternationals. — From Lucas Oil reports

It’s been 15 long years since North Florida Speedway in Lake City has been part of Super Late Model action during Speedweeks, and track co-owner Phil Guadagno is glad to bring the division back to the 4/10-mile oval on Feb. 10.

“They had some big names go through here years and years ago,” said Guadagno, whose racing background was primarily in big-block modifieds when he lived in upstate New York. “We met quite a bit of the Super Late Models drivers, and saw they put on a good show. We wanted to give them another option coming down on a day that they’re off, to make a few bucks to move to their next venue.

“We’ve always wanted to run a Super show. We just have a good program and a real good racetrack to do it ... it’s real good for passing and side-by-side action, and that’s why we decided to do it.”

Guadagno, 42, and his wife Liz have operated the track for eight years as a secondary vocation to their primary jobs. Phil operates Aaron’s furniture and appliance stores in Orlando and Liz works with Dancewear Corner, retail stores for ballet and dance clothing and accessories.

“We do it for fun. It’s all fun and all proceeds go back to the drivers. ... The racetrack is our getaway on the weekend,” said Phil Guadagno, recognizing it’s tough to do much better than break even. “If I did it for a living, I can see why tracks open and close. It’s a tough game if you’re drawing a salary off the racetrack.”

Guadagno has made some off-season upgrades at the track, adding aluminum grandstands from the long-closed St. Augustine, Fla., track that expands capacity by about 1,000. He hopes some of those fans will be able to cheer on some home-state racers who will battle drivers traveling from different parts of the country to Speedweeks.

“We’re definitely going to have some locals,” Guadagno said, adding that he hopes as many as 10 home-state drivers will compete at the track that typically runs Limited Late Models and United Dirt Late Model Challenge Series events. — Todd Turner