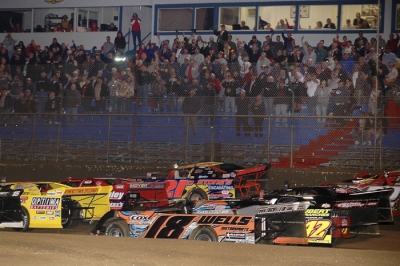 The $5,000 bonus for the top Super Late Model driver as East Bay Raceway Park’s 37th annual Dart Winternationals is intact. Just a week before the Feb. 10-16 Lucas Oil Late Model Dirt Series action at the Gibsonton, Fla., track, the tour announced that Dart Machinery is back as the title sponsor for the popular miniseries for the eighth consecutive season.

“I want to thank Dart Machinery for partnering with East Bay Raceway Park and supporting the 37th Annual DART Winternationals again this year,” East Bay president Al Varnadore said in a news release. “We’re very excited to have DART and the LOLMDS back again. We're always excited to see the many fans from all across the country attend the event, but if fans can't make it down this year, we are offering the entire East Bay Winternationals online by pay-per-view at www.eastbayracewaypark.com.”

Ritchie Lewis, director of the Lucas Oil Series, is glad to have the title sponsor back, too.

The six nights of action at East Bay include a complete program of Late Model-only action with hot laps, time trials, heat races, consolation races, the PRC-sponsored Strawberry Dash and a main event each night with $200,000 in purses on the line.

Dart’s sponsorship provides $5,000 to the top points-earning driver throughout the week. Racers must compete in all six events to be eligible for the bonus.

Two additional starting spots are available for all six nights of action. Performance Rod and Custom’s Strawberry Dash will transfer one of the extra driers into the main event, while DirtonDirt.com sponsors the fast time provisional for the fastest qualifier failing to make the starting field through preliminary events.

The series has also instituted a pair of non-qualifiers’ races for Feb. 15-16 races, the only Lucas Oil Series points events for the week. Drivers failing to reach the final two features can compete in the $1,000-to-win, $100-to-start event.

“The whole week of racing will be fun and exciting as it is every year,” Lewis added. “The Dart bonus money, the two extra starting spots in the feature, and the two non-qualifier races just make the whole week at East Bay a great experience for both racers and our great fans.”