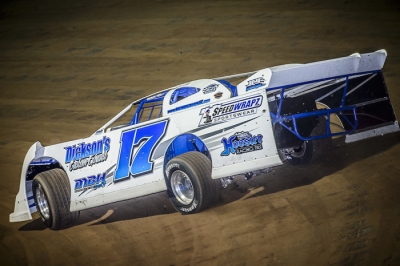 With only four victories, the 2012 season won’t go down as the winningest year of Nick Dickson’s Super Late Model career. But with three victories paying $5,000 or more at three different tracks, it will, however, be remembered as one of the Lewistown, Pa., driver’s best.

“I would say 2012 is probably my best season so far,” said Dickson, the 32-year-old second-generation driver whose previous career highlight was a $10,000 victory at Selinsgrove (Pa.) Speedway in 2007. “I’ve won more than three or four a year before, but that was just winning regular shows mostly. And I’ve won big races here and there, but to win that many big races in one year, that was a pretty special year.”

But winning races wasn’t all that made Dickson’s season memorable. He was a contender at the majority of events he entered and used consistent finishes to nab a pair of track titles. Even though he didn’t start the year planning on chasing any track championships, Dickson, who had never previously chased track points, topped Hagerstown’s weekly points chase and Hesston’s five-race Speedmonster Super Series.

“It seemed like we were a lot more competitive this year and up front every week,” Dickson said. “We won two track championships and won a few big races, and we won at some tracks I never won at before. Like Winchester, I’ve always hated that place. I just wasn’t ever good there, so to win there, to win at Hagerstown and to win the two track championships, I’d say we accomplished quite a bit for one season.

Perhaps most surprising about Dickson’s breakout season, was that it came after a major overhaul of his racing program during the offseason. A longtime Rocket Chassis driver, Dickson and his family-owned team made the switch to MasterSbilt Race Cars from the shop of setup guru Huey Wilcoxon.

Even though the Indiana-based MasterSbilt Race Cars enjoys a reputation alongside brands like Rocket as one of the sport’s premier chassis manufactures, Dickson wasn’t sure what to expect in his new ride, especially considering his home region is one of the few areas where MasterSbilt cars aren’t as prevalent as they are around the rest of the country.

While there were a few ups and downs along the way, for the most part, Dickson’s transition to his new MasterSbilt car was better than expected.

“We got a new MasterSbilt car after running Rockets for all those years,” Dickson said. “I wasn’t really sure what to expect because there hasn’t always been a lot of MasterSbilts in this area. But Huey’s really got them going pretty good.

“The Rockets had been good to us, but we went that route just for a change of pace and really was surprised at how good the car felt to me. I guess it was just because my driving style suited what the cars need. That was a huge part of our success, just being comfortable in the car.”

Dickson’s stellar 2012 campaign would’ve been even better if not for a near-miss at Lincoln Speedway in Abbottstown, Pa., in June.

Competing in the final round of the Appalachian Mountain Speedweek, a six-race miniseries he typically follows each season, Dickson dominated the majority of the 40-lap race and appeared to be headed for a $7,000 victory. He built a nearly five-second advantage midway though the race only to get tracked down and passed by national traveler Tim McCreadie of Watertown, N.Y., with less than five laps remaining as he struggled to negotiate heavy traffic on the unfamiliar track surface.

“I thought I was gonna have another big one but got passed by McCreadie with three laps to go leading a $7,000-to-win race,” said Dickson, who was gunning for his second AMS victory and first since 2010. “It was heartbreaking. I really thought we were about to have another big check to hang on the wall.

“At least I learned a little bit about racing in the rubber. I don’t race a lot on rubbered-down tracks. That was a case where I did the wrong move in traffic. I’ll definitely know what to do better next time.”

While the series finale nearly produced another big victory for Dickson, the rest of the AMS tour wasn’t nearly as successful. In fact, the tour’s first three races — two of six events were rained out — made up what was arguably Dickson’s worst stretch of races of the season with the series regular failing to qualify for two events and finishing 18th in the other.

“We honestly had something messed up on the car and found it in the pit area the day of that last race,” said Dickson, who followed his runner-up effort in the finale with his $5,100 victory at Hesston the following week. “We fixed it and it was a totally different car. We had ran all week with the car screwed up, but we found it and — boom — the car felt 100 percent better.”

Like many experienced racers, Dickson is doing his best to turn his disappointments into a positive. While it would be easy to forget those setbacks and instead focus on his success, Dickson is using the poor Speedweek showing, along with a bit of a slump toward the end of the year, as motivation as he prepares for the 2013 season.

“I guess that was part of getting used (to the MasterSbilt), cause it’s easy to get off when you’re in a new car,” Dickson said. “The good news is I think we’ve got some of the things that was messing us up narrowed down and solved. Stuff like that just makes you wanna do better.”

With the gremlins from last season hopefully located and remedied, Dickson is looking for bigger and better in 2013. He plans to follow a schedule similar to last year’s, which he hopes will produce even more success.

“You always want to do better than you did the year before. That’s our goal,” Dickson said. I think we’ll be a lot better wherever we go and should do even better. I’m excited about hopefully winning some more big races — some even bigger races. The season really can’t get here quick enough now.”