Scaling back leads to bigger things for Spence 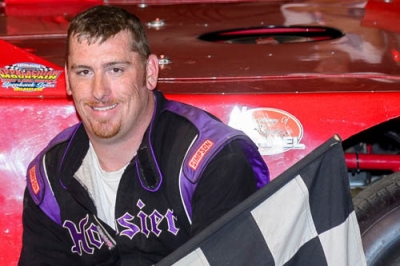 J.T. Spence ended the 2011 season with no plans of racing in 2012. With his family-owned Super Late Model team tapped out financially and his desire to race worn down by the energy and time requirements that come with the sport, Spence was looking forward to taking some time off.

“I wasn’t planning on racing at all,” said Spence, the 29-year-old Winchester, Va., driver who began racing Super Late Models in 2004 and counts the ’07 Hagerstown (Md.) Speedway Super Late Model championship among his career highlights. “With three kids and a wife, it was just my decision to take some time off and spend some time with the family. Anyone who races can tell you how much time it takes. And with the costs getting out of hand, me and my father decided to sell all our racing equipment and just take a break.”

The break didn’t last long. Before Spence could even begin to enjoy much time away from the sport, he found himself right back in it, and, conveniently, in a position that made racing much less expensive and much less time consuming.

Early in 2012, Spence received an offer from car owner Doug Timmons, a former promoter of Winchester (Va.) Speedway, to drive his Rocket Chassis in select steel block Late Model events in the region. Burned out as he may have been, the offer, which boasted good equipment, low expenses and a limited schedule among other incentives, was too good to pass up.

“Doug Timmons called me to see if I wanted to race and I thought ‘Man, this might be a pretty good deal,’ ” Spence said of his initial reaction to Timmons’ offer. “We put a new Hershey motor in it and had a pretty good year just picking and choosing some of the bigger steel-block races around here. I really didn’t wanna run full time again and neither did they. It turned out to be a perfect fit and we had a lot of fun racing together.”

Spence didn’t just have a lot of fun as Timmons’ driver; he had a lot of success as well. Making the most of his part-time schedule, Spence drove Timmons’ car to an impressive seven victories in just 11 starts. Among his triumphs were special events at three different tracks, including the Tony Armel Memorial and the Bob Carter Memorial at Winchester, the Small Car Nationals at Hagerstown (Md.) Speedway that he won by a nearly four-second advantage and a topless special at Williams Grove Speedway in Mechanicsburg, Pa., in which Spence topped 42 entries for his first victory at the historic half-mile oval.

The seven wins didn’t quite eclipse his previous winningest season of eight victories, which came during his rookie steel-block Late Model season in 2001, but 2012’s winning percentage (58 percent) was by far the best he’s ever had. The fact that the majority of his victories came in special events helps Spence say without reservation that 2012 is his best season to date.

“I won eight races the first year I raced steel blocks at Winchester in ’01, but I had to race a whole lot more to do it,” Spence said. “This year, for the low amount of races we ran and the places we won at — Hagerstown, Winchester, Williams Grove — it was awesome.

“It really was a helluva year. It was fun every week and everybody enjoyed it. Whenever you can win as much as we did, racing’s a lot of fun.”

Spence’s impressive season didn’t go unnoticed. In fact, he caught the attention of many in his home region, including Super Late Model car owner Greg Gunter, who was so impressed with Spence’s dominance that he offered Spence a ride that will allow him to return to Supers this season.

“Gunter’s probably one of the best car owners in the area to drive for,” Spence said. “He has the top-of-the-line stuff, and I’m just thrilled to have the opportunity to drive his car. Hopefully we keep our momentum going and get a lot of wins, so hopefully this is something that lasts a long time.”

Of course, the new ride with Gunter will mean a return to a full-time racing schedule, but that’s just fine with Spence, who also plans to continue driving for Timmons in select steel-head Late Model events.

“It’s going to be a lot busier for us, but I’m really excited to get back after it and to get back in Supers,” Spence said. “That steel-block stuff is fun and I’m glad I can keep driving for Doug some. But my heart is with Supers and there’s a lot more bigger races around here for Supers. I’m just really excited.”

Spence and Gunter haven’t set a definite schedule for the season yet, but preliminary plans are for Spence to race weekly at Winchester and compete for the track’s Super Late Model title. Winchester’s special-event-laden schedule will afford Spence plenty of chances to compete in big races, and he plans to add in a number regional specials, including quite a few Three State Flyers events.

While he’s realistic in acknowledging that winning at the same pace as he did last season is unlikely, Spence is still setting the bar high for himself and his new team.

“The caliber of equipment they’re furnishing me and the opportunity he’s giving me, it’s definitely the best situation I’ve been in,” Spence said. “There’s no excuses why we can’t run with the best around here, so I’m going to do my best win races. Everybody knows that if you win races, everything else seems to work out. Hopefully we can win races and have a little fun.”