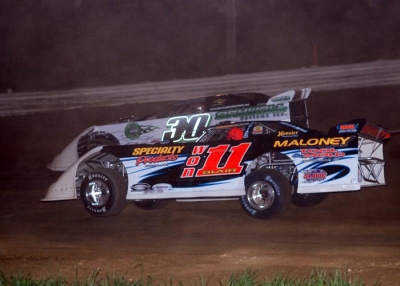 KERENS, W.Va. (May 2) — When your pre-race pep talk is with five-time World 100 champion Billy Moyer, that's a good sign. And if you're driving the same chassis that has carried Moyer to a nation-leading 10 victories in 2008, things are doubly good. | IRS notebook | Slideshow

So it was for Steve Shaver at Elkins Speedway as, after a pre-race phone call, the Vienna, W.Va., driver led all 50 laps for his first career Independent Racing Series victory worth $5,000. The polesitter fought off early challenges from Tim Dohm at the dusty 3/8-mile oval, then withstood Robbie Blair's late charge to win by less than a half-car length in front of the hillside grandstands.

Shaver won the dash preceding the feature to earn the pole position, but his crew members told him Blair was faster on the stopwatch, so he was leery of the IRS points leader near the finish. "I figured if he got by Dohm he'd be coming hard," Shaver said. "I started losing my right rear tire right about when they were throwing the halfway mark, so I just kind of tried to conserve and not be so hard on 'em on corner entry. I figured Blair would be coming pretty hard. I started hearing something on the guardrail, and I knew he was getting close. I felt like my car was good enough that if he did show his nose, I could get away from him."

Blair, the Titusville, Pa., driver who took second from Dohm with two to go, didn't show his nose until the final lap and got alongside of Shaver exiting turn four, falling just a bit short with his last-ditch rally. "At the end my car was getting pretty good. Just one short I guess — or a foot short, or whatever you want to call it," he said. "It was a good race. It had to be exciting for the fans."

Dohm, of Cross Lanes, W.Va., settled for third in a race where the top three cars broke away and had a half-track margin on fourth-running Joe Loudin of Buckhannon, W.Va., with 10 laps remaining. Dohm made a couple of passing attempts around the 10-lap mark, but Blair was the driver to come alive at the finish. "Shaver was just good, and I knew he would be, and I knew we needed to ride a while, and hopefully do something towards the end," Dohm said. "Blair, I guess he was more or less just riding the whole time anyway, and he went at the end."

Shaver was making his first feature start in the Victory Circle M1 Chassis by Moyer he purchased last year. Shaver tuned it up last month in a race at K-C Raceway near Chillicothe, Ohio, but loaded up after the car's nosepiece was damaged in a heat race. At K-C, Shaver knew some of the suspension settings were off, and Moyer helped him iron out those problems and get the car in victory lane.

"I caught him on the cell phone and he gave me a few pointers that I think helped me stay ahead of Blair," Shaver said. "I feel blessed to win the first night out really — I don't even count K-C — so the car's got a lot of potential. I like my Rocket cars also, but this thing, when the tracks get slick, I think that's when they'll really shine. And you can run the cushion with 'em. It's real drivable."

Mike Balzano rallied from his 16th starting spot to finish a distant fourth as he overtook the surprising Loudin on the last lap. Paul Wilmoth Jr., on a four-race winning streak and a two-time winner at Elkins in regular-season action, was sent to the tail for his part in a lap-three accident and dropped out in 20th.

The race was slowed three times, all with two laps complete. Butch McGill, whose team battled mechanical problems throughout the night including changing a carburetor, slowed to bring out the first caution. Tim Senic (stopping in turn three) and Jared Hawkins (spinning in turn four) brought out another yellow on the restart. Then came the race's most serious incident that brought a red flag as Wilmoth and Chuck Harper made contact in turn three, triggering a melee that left four cars piled together and knocked Charlie George, Devin Friese and Jacob Hawkins out of the race. No one was injured.

Last year's IRS champion, Rick Aukland of Zanesville, Ohio, slipped over the banking on the first lap of his heat race and finished back in the pack. He took a provisional starting spot in the feature and ended up a lap down in 16th.