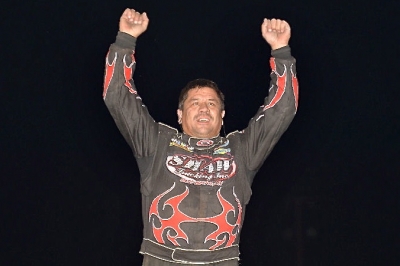 The eighth-starting Shaw advanced into the top five early and moved up to third after Shane Clanton of Fayetteville, Ga., suffered a broken rear-end while leading 20 laps into the unsanctioned 30-lap race. Shaw then slipped by Justin Kay of Wheatland, Iowa, for second a few laps later and went by polesitter Billy Moyer of Batesville, Ark., when he nearly spun while leading with three laps remaining. | Arizona coverage index

“I was there, but I guess Billy and I were about the same speed,” Shaw said. “I was hoping he would do what he did, but I didn’t expect Billy to do that there.”

Shaw cruised through the closing laps while fifth-starting Tim Fuller of Watertown, N.Y., also got by Moyer and followed up his victory in the first leg of the doubleheader weekend Saturday night with a runner-up finish. Moyer, who battled brake issues throughout the race, held on to finish third followed by R.C. Whitwell of Tucson, Ariz., in fourth and Kay in fifth.

Clanton appeared to be headed for a dominant victory after storming from sixth to overtake Moyer early in the 30-lapper until slowing with mechanical issues on lap 10. The caution for Clanton saved Kay, who spun just after the caution appeared. He reassumed the second position for the restart but his car was damaged from contact with Shaw during the spin.

Shaw’s victory came after he suffered rear-end issues in his primary car, a Victory Circle Race Car from Moyer’s shop, during Saturday’s event. For Sunday, he was forced into his backup car, a Bloomquist Race Car.

Sunday's event wrapped up the Late Model portion of the Wild West Shootout, which returned to Central Arizona for the first time since 2008. Tucson (Ariz.) International Raceway, which hosted the Wild West Shootout for 2010-2012, will continue Arizona's January action with six events Jan. 12-20. DirtonDirt.com will provide live coverage of all six events at Tucson. | Order live video

The live broadcast is begins at 3:15 p.m. Mountain Time (4:15 Central) with racing scheduled for 4. … The car count dropped from 25 Saturday to 22 today. ... Among cars dropping out was last night's fifth-place finisher Rodney Sanders. The modified standout was impressive in his making his Late Model debut, but damaged the the engine in his MB Customs Race Car. ... Three heat races will use passing points to determine the lineup for tonight’s 30-lap feature. The top eighth in passing points redraw for their feature starting spot. … Tim Fuller of Watertown, N.Y., won Saturday night’s Wild West Shootout feature, earning $3,000 in his first-ever race in Arizona. … Don Shaw of Ham Lake, Minn., is switching to his Bloomquist Race Car for today’s action after breaking the rear-end in his Victory Circle by Moyer car during Saturday’s feature. … Billy Moyer’s Saturday night took a negative turn early when he tangled with Joey Moriarty in his heat race. Moyer took blame for the incident, saying that even though Moriarty forced him low, he had saw him run that line while riding behind him for the previous two laps. The setback cost Moyer a likely chance to be in the top-eight redraw; he recovered by advancing from 22nd to eighth in the feature. … Billy Moyer Jr. said he knew he was in trouble early in Saturday’s feature because he couldn’t run the bottom. He was correct in that assumption as he dropped from the lead to ninth at the finish. “I had it on a silver platter last nice and gave it away,” said Moyer Jr., who was racing on his 25th birthday. “Would’ve been a great birthday present.”