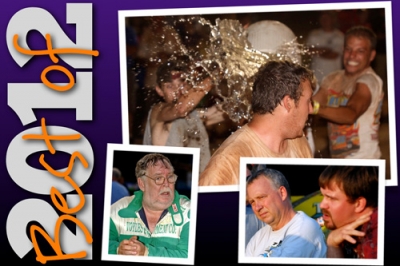 With top driver honors previously published, DirtonDirt.com takes a look at some other top-five lists from the 2012 season, running the gamut from the top-five performances to top-five gaffes of the year:

Driver of the Year battle: The top candidates for Driver of the Year at midseason were red-hot winners Billy Moyer, Don O’Neal and Darrell Lanigan, who led the World of Outlaws points from first race to last. But the late charge by Lucas Oil Series champ Jimmy Owens of Newport, Tenn., who reeled off five straight late-season victories including Dirt Track World Championship victories and a WoO World Finals sweep at Charlotte, changed the complexion and, for DirtonDirt.com, decided Driver of the Year honors in his favor. | Best of 2012 coverage index

Lanigan’s record-setting season: With the most dominating campaign in World of Outlaws history, Darrell Lanigan of Union, Ky., rewrote the series record book, winning a record 15 races at 15 tracks in 12 states and Canada. He had a record-setting stretch of six straight victories, scored 33 top-five finishes in 40 starts and captured an unprecedented three 100-lap victories. He won a record .375 of his starts, led nearly four times more laps than any other driver, and totaled a record $426,700. It’s a season unlikely to be matched any time soon.

Eldora’s big changes: Historic Eldora Speedway tweaked formats for the $100,000-to-win Dream and prestigious World 100 in the spring, then in autumn announced an overhaul of Dirt Late Model racing’s biggest events in 2013. Both events will be expanded to three days of action apiece with nearly $200,000 added to the purses along with feature racing each night. Additionally, the Tony Stewart-owned oval will be the first dirt track to host a major NASCAR event in 43 years when the Camping World Truck Series hits the Big E next summer.

Rocket house car: After becoming the best Dirt Late Model racer of his generation, two-time WoO champ Josh Richards of Shinnston, W.Va., bowed out of his father’s Rocket Chassis house car to pursue a NASCAR Nationwide Series ride. Richards returned to run more races — including winning in WoO action at Merritt (Mich.) Raceway, where in victory lane he put an arm around the race's runner-up and his 2012 substitute, young Brandon Sheppard of New Berlin, Ill. Sheppard proved his mettle, winning in his first start in the car, grabbing a Summernationals victory in route to finishing third in points on the UMP DIRTcar circuit, and nabbing a $12,000 WoO victory at Belle-Clair Speedway.

Francis follows Davenport (again): One year after replacing Jonathan Davenport in the Barry Wright Race Cars house car, Steve Francis of Ashland, Ky., did it again this fall. Clint Bowyer Racing fired Davenport and tapped Francis, bringing the Hall of Fame chassis builder along in meshing the teams into one with Jared Landers staying on board as the second driver. Davenport landed on his feet with North Carolina-based AES Racing.

Marlar’s Hillbilly 100 rally: Starting on the tail with a provisional — also at I-77 Raceway Park — Mike Marlar of Winfield, Tenn., rallies past leader Don O’Neal on the 77th lap en route to a $25,000 Hillbilly 100 victory on the Lucas Oil Late Model Dirt Series.

Owens sweeps World Finals: Jimmy Owens of Newport, Tenn., became the first driver to sweep both $10,000 races in the Peak Motor Oil World of Outlaws World Finals at the Dirt Track at Charlotte.

Infamous victory lane photograph: In a photo of Brian Birkhofer giving an interview following his $25,000 Silver Dollar Nationals victory at I-80 Speedway, Scott Bloomquist crew member Jason Palubicki is caught in the background snapping a shot of the rear of Birkhofer’s car with a cell phone camera. The image went viral in the Dirt Late Model world.

Carolina Crown tire fiasco: Scott Autry of Fayetteville, N.C., won Lancaster (S.C.) Motor Speedway’s Carolina Crown on the track, lost it after his tires failed a postrace lab test, then was reinstated as the $20,000 winner more than two weeks after the race following a topsy-turvy turn of events. The initial tire test proved to be incorrect because Autry’s rubber was compared against an outdated benchmark.

Marlar’s National 100 disqualification: After Mike Marlar’s fast qualifying time at East Alabama Motor Speedway’s National 100 was disallowed, the Winfield, Tenn., driver protested the ruling that he used an illegal tire, vowing to take a polygraph test to proclaim his innocence. The track disqualified Marlar’s tire through use of a portable gas detector, saying the reading was six times above normal levels. He was one of four drivers to have a tire ruled illegal at a race won by Jimmy Owens.

Oklahoma track zoned out: Black Gold Speedway near Bartlesville was nearing completion when Osage County forced a halt to construction because of zoning issues.

Clanton wreck at Tucson: Shane Clanton clips an infield tire while leading the third round of Tucson’s Wild West Shootout and slams the frontstretch wall. He wasn’t seriously hurt, but destroyed his race car in an event won by Don O’Neal

Bloomquist’s jumped start: Scott Bloomquist was running second to Shane Clanton at Eldora’s Dream XVIII when he jumped a lap-23 restart and officials moved him back to the fourth position for the ensuing restart.

Farmer City's lost sanctioning: Farmer City (Ill.) Raceway’s dispute with the World Racing Group leads to the loss of UMP DIRTcar sanctioning and contributes to a change in promotership.

Buck Simmons: First-ballot Hall of Famer Buck Simmons of Baldwin, Ga., the “Living Legend” who won more than 1,000 feature races on dirt and asphalt over more than four decades, died Aug. 12. The winningest driver in National Dirt Racing Association history was 66. “He was one of the very best drivers in the country,” said fellow Hall of Famer Larry Moore, a former teammate. “Every race I went to he was the guy I had to outrun. He was my teammate and my biggest competitor.”

Bob Newton: The Hall of Famer who founded Hoosier Racing Tire, one of the most powerful companies in Dirt Late Model racing, died Sept. 26. He was 85. Newton, whose tiny operation that started in Lakeville, Ind., in 1957 blossomed into a 400-employee operation and the world’s largest racing tire manufacturer, was key in supporting Dirt Late Model organizations and providing rubber for thousands of drivers over five decades. “No one cared more about racers than Bob,” said NASCAR champion and Eldora Speedway owner Tony Stewart. “For decades, he's been responsible for shaping short-track racing.”

Jimmy Mosteller: The fast-talking, cigar-chomping Georgia racing announcer and co-founder of the Hav-A-Tampa Dirt Racing Series died on the Fourth of July at an assisted living center near Atlanta, Ga. Mosteller, plagued by heart problems but still attending races on occasion, was 85. Mosteller announced at more than 100 racetracks, was an inaugural member of the National Dirt Late Model Hall of Fame and a member of the Georgia Racing Hall of Fame. “He’s like one of the family. We’re going to miss him and he was awfully special to us,” said Dixie Speedway owner Mickey Swims, recognizing his unique ability behind the mic. “There’s no doubt about it, there’ll never be another Jimmy Mosteller.”

Russell Baker: The legendary Dirt Late Model engine builder whose motors were renowned for their power and durability died April 17 at his Miami, Okla., home after fighting leukemia since early February. He was 66. An innovator in developing powerful, smaller motors during the golden era of the Hav-A-Tampa Dirt Racing Series in the late 1990s, Baker’s engines powered standout drivers Wendell Wallace, Billy Moyer, Bill Frye, Dale McDowell, Steve Francis and others to victories in some of the sport's richest events. “He was just one of the good guys,” said team owner and long-time friend Tim Logan. “There’s not a whole lot of them left. You just can't say it in words the type of guy he was.”

Charles Haffer Jr.: The likable St. Louis-area dirt racing photographer, a portly and always-smiling race fan known by everyone as Photobilly, died Aug. 7 in an Iowa highway accident returning to his St. Peters, Mo., home after a race. He was 44. Haffer shot and sold photographs at tracks throughout the region including Belle-Clair Speedway in Belleville, Ill., Highland (Ill.) Speedway and Quincy (Ill.) Raceway. His death brought an outpouring of monetary and emotional support for Haffer's family, and the World of Outlaws race at Belle-Clair was run as the Photobilly 50. Haffer’s frequent sidekick Tony Penberthy was also killed in the accident. “You never heard a foul thing from him or about him,” Quincy Raceway driver Justin Reed said. “I wish everyone had the outlook Billy did.”