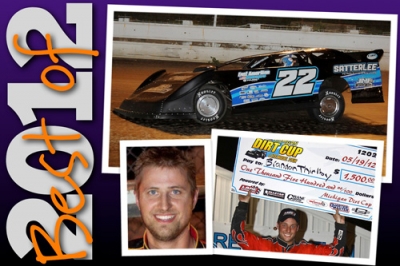 As part of its ongoing Best of 2012 coverage, DirtonDirt.com hands out awards to worthy Dirt Late Model drivers. We rank the top breakout drivers, top newcomers and most improved drivers and comeback drivers for the past season. This season's honorees:

Jesse Stovall (00), Galena, Mo.: Winning at a dozen tracks and totaling 16 victories, Stovall turned in his career-best season and a campaign rivaled only by Terry Phillips in recent years among Missouri drivers. He started off strong with a MARS victory in Clarksville, Tenn., added a career-high $10,000 victory at ArkLaTex Speedway’s Pelican 100, and never slowed down. He tallied a series-best seven MARS victories en route to the championship, and was runner-up on the Lucas Oil MLRA tour for good measure. Besides Clarksville and ArkLaTex, Stovall won at Monett, Caney Valley, Bakersfield, Adams County, Mid-American, Thunderbird, Jetmore, Humboldt, Springfield and 81 Speedway.

George Lee (61), Loudonville, Ohio: Posting his best season in five years, Lee piled up an impressive 11 victories between Ohio's NAPA Wayne County and Hilltop Speedways. Among his Hilltop victories was a $5,000 payday on the UNOH All Star Late Model Series at Hilltop in a 40-lapper on Memorial Day weekend, and a $3,000 ADRA-sanctioned victory at Hilltop in outrunning Doug Drown.

Walker Arthur (87), Forest, Va.: The 27-year-old driver, a two-time Steel Block Bandits champ, traveled broadly in 2012 while running more open-competition engine events than ever before. The travels paid off with a pair of career-high $10,000 victories late in the season. The first came at Natural Bridge (Va.) Speedway’s Sunoco Fall Classic and the second in an Ultimate-sanctioned event at County Line Raceway in Elm City, N.C.

Jason Russell, Henley, Mo.: The modified graduate tied the Lucas Cattle United Late Model Association record with 11 victories en route to the championship in his rookie Late Model season. Russell was the only ULMA driver to win at three tracks (Callaway, Lucas Oil, Double-X) and captured the Callaway title. The 32-year-old won one out of three starts in ULMA action.

Robert Baker (17m), Bryant, Ark.: The modified graduate found success in his Jeff and Kim McNew-owned car, earning Rookie of the Year honors on the Comp Cams Super Dirt Series. He finished fifth overall on the Arkansas-based tour and captured a victory at Diamond Park Speedway in Nashville, Ark., in just his fourth series start.

Brandon Thirlby (m14), Traverse City, Mich.: The former power boat racer achieved all his goals and then some, reeling off a career-high 15 victories and capturing the championship on the first-year Allstar Performance Michigan Dirt Cup. The 25-year-old won a series-best three MDC races, including the opener (I-96 Speedway) and finale (Winston Speedway). Thirlby also collected championships at I-96 and Cherry Speedways, where he was virtually unbeatable. He also notched a regional UMP DIRTcar title.

Chad Stapleton (32) Edinburgh, Ind.: The 36-year-old’s bombastic personality has been his calling card, but Stapleton showed his capabilities as a racer with a track-best eight victories at Ohio’s Moler Raceway Park and his first-ever victory at Brownstown (Ind.) Speedway. Stapleton clicked off 10 victories overall, including a career-best $3,000 payday at Lake Cumberland Speedway in Burnside, Ky., in the McGowan Excavating 40. Stapleton was also a successful car owner with Bub McCool putting a Stapleton-owned entry into the World 100.

Tommy Weder Jr. (02), Woodward, Okla.: The 27-year-old modified standout nabbed his first Late Model victory with a home-track run at Enid (Okla.) Speedway, then concluded his season with a victory at the Belleville (Kan.) High Banks to wrap up the National Championship Racing Association crown. Weder outpointed veteran Gary Gorby of Caney, Kan., for the NCRA title, taking the lead midway through the season. After missing the series opener, Weder was never worse than seventh in any NCRA race while clicking off six top-five finishes in the final eight series events.

Kyle Logue (21k), Cisco, Ill.: Although his handful of victories primarily came — as usual — at his home-track Macon Speedway, the 32-year-old Logue scored some impressive near-misses in his Keith Brown-owned car. He had a career-best Summernationals finish of second at Fayette County Speedway in Brownstown, Ill., earned $5,000 with a runner-up finish to Jason Feger in Fairbury’s Prairie Dirt Classic, and scored a top-five run in World of Outlaws action at Belle-Clair Speedway in Belleville, Ill. The Shannon Babb protï¿½gï¿½ who has always shown promise ratcheted it up a notch against tougher competition.

J.R. Hotovy (13), Hartford, Mich.: Pressed into more promotional duties at Hartford Motor Speedway after his father-in-law underwent cancer treatment, the 32-year-old managed to stay on point when he was behind the wheel of his Bloomquist Race Car. Hotovy notched six victories at Hartford, including the Michigan Dirt Cup’s visit to the half-mile oval, en route to the track championship. He also made his first major-race start at Ohio’s Eldora Speedway, posting a 12th-place finish in the World 100.

Kevin Weaver (B12), Gibson City, Ill.: Going for the unprecedented accomplishment of winning a UMP DIRTcar weekly points title 20 years after his first championship, the 48-year-old veteran fell just shy, finishing second to Brian Shirley. But Weaver’s season was his winningest in years as he racked up a UMP DIRTcar-best 18 victories in 51 starts. He also captured the track title at Kankakee County Speedway, where he nabbed his first career Sunoco ALMS victory.

Mike Marlar (5B), Winfield, Tenn.: After going winless in 2011, Marlar’s first full season with Bryson Motorsports was up-and-down before a late-season hot streak. The 34-year-old Marlar had one of the highlights of the season with his worst-to-first, $25,000 victory in the Hillbilly 100 at I-77 Raceway Park in Ripley, W.Va., on Labor Day weekend, then capped his season with $5,000 and $10,000 victories at Georgia’s Screven Motor Speedway and South Carolina’s Cherokee Speedway the weekend before Thanksgiving. Overall Marlar had six victories and finished second in Schaeffer Oil Southern Nationals points.

Terry Phillips (75), Springfield, Mo.: Rebounding from a single-victory Late Model season in 2011, the 46-year-old Phillips switched to a Bloomquist Race Car and got back on track. He ended a 14-month-long winless streak in June, then reeled off an eight-race stretch of six victories and two runner-up finishes, including a $12,000 payday at the Great American Dirt Track in Jetmore, Kan. He won 18 races overall, seven in his Late Model and 11 in his modified.

Doug Drown (63), Wooster, Ohio: After a relatively quiet 2011 with a handful of local track victories, Drown connected with car owner Sean Weekley midway through the season and became a factor wherever he showed up. The Drown-Weekley connection launched with a mid-June weekend sweep at Muskingum County and Hilltop Speedways, and went on to collect six victories overall. Drown also put his No. 63 in the mix at several Lucas Oil Late Model Dirt Series events. The team plans to start 2013 at Florida Speedweeks.