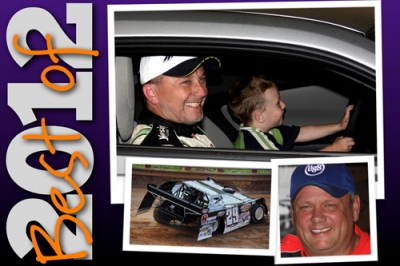 With the 2012 racing season in the books, DirtonDirt.com takes a closer look at top five drivers among national, regional and weekly Dirt Late Model competition. Here's the Best of 2012:

Jimmy Owens (20), Newport, Tenn.: After breaking through for his first Lucas Oil Late Model Dirt Series title last year, there was no championship hangover for Jimmy Owens in 2012. Owens continued to perform among the best in the nation throughout the season in earning $75,000 for his second straight Lucas Oil crown and used an impressive late-season streak of five consecutive victories to solidify himself as the top choice for DirtonDirt.com’s 2012 Driver of the Year Award. | Best of 2012 coverage index

The 40-year-old Owens had a slow but consistent start to the year before exploding with two major victories in May. The first came at Batesville Motor Speedway’s inaugural Bad Bay 98, which earned Owens a $10,000 payday and a new Chevy Camaro, followed by his second consecutive Show-Me 100 triumph at Lucas Oil Speedway the following week. Owens later added another crown jewel victory to his resume with his first Dirt Track World Championship trophy at Portsmouth Raceway Park in October.

While the $50,000 DTWC victory wrapped up the Lucas Oil tour’s campaign, Owens was just getting started on one what ended up as one of the sport’s most impressive winning streaks in recent memory. In the week’s following the DTWC, Owens won the Cotton Pickin’ 100 at Magnolia Motor Speedway, swept the World of Outlaws World Finals at The Dirt Track at Charlotte and won the National 100 at East Alabama Motor Speedway. Owens finished the year with 12 victories overall, including seven on the Lucas Oil Series.

Owens was one of just 10 drivers to spend the entire season ranked in DirtonDirt.com’s Top 25 poll with an average ranking of fourth. He started the year ranked 10th after a quiet Speedweeks, but quickly climbed once the season got rolling and topped the poll five times, including a three-week run in mid-summer and the year’s final two polls.

The only significant blemish to Owens’ impressive season was missing the feature lineups for Eldora Speedway’s Dream and World 100. Owens missed the Dream after getting caught in a heat race pileup and missed the World for the first time since 2003 only after suffering flat tires in both his heat race and the B-main.

Darrell Lanigan (29), Union, Ky.: No driver has ever dominated a national tour quite like Lanigan did on the World of Outlaws Late Model Series this season. Lanigan destroyed WoO’s single-season win record, scoring 15 victories in the tour’s 40 races — six more than the tour’s previous modern-era record of nine wins set by Richards in 2011 and three more than the previous all-time WoO record of 12 wins set by Billy Moyer in the tour’s first incarnation in 1989.

Lanigan also set records for consecutive victories (six) and all-time series wins (41). He became the first driver ever to lead the series standings for an entire season on his way to joining Richards as the only two-time titlists since the series was restarted in 2004. His final championship margin of 228 points over Rick Eckert was also the largest in series history.

Lanigan was by far the most consistent performer over the entire season, topping the DirtonDirt.com Top 25 a whopping 26 of 38 weeks. He also never dropped out of the ranking’s top five, a feat only matched by Moyer. Perhaps most impressive, Lanigan was ranked second or better for all but four weeks and averaged a ranking of 1.5 for the entire season.

Lanigan’s success made him a prime candidate for Driver of the Year honors, but the luster of his record-setting campaign was dulled slightly by the inconsistency of the other members of the WoO roster, which in losing Richards to NASCAR, didn’t include one of the tour’s top competitors. Lanigan also missed opportunities to score major victories away from the WoO tour by skipping Florence Speedway’s North-South 100 and the DTWC at Portsmouth, two races that are considered among the sport’s traditional crown jewel events.

Don O’Neal (71), Martinsville, Ind.: The 48-year old O’Neal continued his run as one of the sport’s top drivers in 2012, racking up a total of 15 victories on his way to a runner-up finish in the Lucas Oil championship chase. O’Neal posted 11 wins on the Lucas Oil tour and added another crown jewel victory to his resume in claiming the $50,000-to-win North-South 100 at Florence.

O’Neal found success early in the year with victories during both the Wild West Shootout at Tucson International Raceway in January and the Dart Winternationals at East Bay Raceway Park in February. He also spread his success throughout the season with a $20,000 Lucas Oil victory during Magnolia Motor Speedway’s Clash at the Mag in July, his North-South victory in August and a $15,000 payday at Whynot Motorsports Park’s Fall Classic in October.

Once again proving his versatility, O’Neal claimed victories in three different rides. The majority of his wins came in in his full-time MasterSbilt Race Cars house car ride, but he added a UMP DIRTcar Summernationals victory in his part-time Moring Motorsports MasterSbilt and debuted a brand new Childress Racing MasterSbilt with a dominant performance in Whynot’s Fall Classic.

Averaging a third-place ranking for the season in the DirtonDirt.com Top 25, O’Neal spent all but two weeks among the top five and never ranked worse than sixth. He spent six weeks at No. 1, including a four-week run during March and April and a two-week stint in May.

Billy Moyer (21), Batesville, Ark.: Adding another solid season to his Hall-of-Fame career, Moyer won 16 races in 2012 highlighted by a pair of victories at Volusia during Speedweeks, Lucas Oil Series victories at Tri-City Speedway and Paducah International Raceway and a win on the opening night of the Knoxville Nationals at Knoxville Raceway.

The 55-year-old Moyer started the year by once again dominating the six-race Wild West Shootout at Tucson, winning three races during the Arizona miniseries for the third straight year. He was also the only driver to win multiple events during Volusia’s six-race miniseries with one UMP DIRTcar-sanctioned win and a World of Outlaws victory.

Moyer had perhaps the most diverse season among top drivers with victories in races sanctioned by six different series and winning paydays ranging from $2,000 to $10,000. Notably, however, Moyer’s season ranked below his usual standards as he failed to earn a victory paying more than $10,000 for the first time since 2007.

Moyer joined Lanigan as the only drivers to rank among the top five of DirtonDirt.com’s Top 25 poll for the entire season, but he spent just one week at No. 1, that coming in early May following his Lucas Oil triumph at Paducah.

Steve Francis (15), Ashland, Ky.: After soldiering through a winless season in 2011, Francis, 45, teamed up with chassis builder Barry Wright for 2012 and rebounded with seven total victories on his way to a fourth-place finish in the Lucas Oil points chase.

Six of Francis’ victories came in Lucas Oil action, including $40,000 paydays in Batesville’s Topless 100 and the Knoxville Nationals at Knoxville. Francis’ only non-series win came during Speedweeks at Volusia’s Speedway Park’s DIRTcar Nationals. Francis was one of the top performers during Speedweeks, winning two races during East Bay’s Dart Winternationals to go along with his Volusia victory.

Francis was the only driver among this list not to spend at least one week at the top of the DirtonDirt.com Top 25 poll, peaking at No. 2 early in the season after his impressive Speedweeks performances. Francis finished the year with an average ranking of sixth, largely due to a mid-season lull that dropped him as far as ninth in the rankings. But he closed the year strong, using his Topless 100 and Knoxville Nationals victories to climb back among the top five in the season’s final few months.

Randy Weaver (116), Crossville, Tenn.: After briefly considering retirement during a part-time 2011 season, the 43-year-old Weaver returned with a vengeance with his new Chip and Rusty Stone-owned Outlaw Race Parts team. Weaver won nine races in 31 starts and earned his third Southern All Star Dirt Racing Series championship in four years. He scored a series-leading six Southern All Star victories, including a sweep of three events at Talladega (Ala.) Short Track. He also earned $7,000 for his unsanctioned Alabama State Championship victory in his first race at East Alabama Motor Speedway.

Max Blair (111), Centerville, Pa.: The 22-year-old Blair topped his previous impressive seasons with an even better one in 2012. Blair piled up a whopping 34 Crate Late Model victories, including a $22,000 triumph in the Fastrak World Championship at Beckley (W.Va.) Motorsports Park. Blair won a series-best 10 Fastrak Northeast tour events en route to another championship, and also added the Crate Late Model title at Eriez Speedway in Hammett, Pa.

Kyle Berck (14), Marquette, Neb.: The 43-year-old Berck had an impressive .500 winning percentage, notching 16 victories in 32 starts. Berck clicked off a series-leading eight Super Late Model Racing Series victories (his 38 career victories are 33 more than any other driver) and won three MLRA- or NCRA-sanctioned specials, twice at home-state Junction Motor Speedway and once at Lakeside Speedway in Kansas City, Kan. He also captured the I-80 Speedway weekly crown and, overall, finished worse than third just six times during the season.

Chris Garnes (42), Evans, W.Va.: While his season will be primarily remembered for his stunning upset in World of Outlaws Late Model Series action at I-77 Raceway Park, Garnes was plenty fast every weekend. The 25-year-old racked up a division-best 18 victories en route to his second straight American Motor Racing Association weekly championship. He added track titles at I-77 and Ohio’s Skyline Speedway, outpointing Andy Bond, Freddie Carpenter, Harold Redman Jr. and Rick Williams in AMRA competition.

Mickey Trosclair (521), Luling, La.: He lost a tiebreaker to Chase Washington for the NeSmith Chevrolet Weekly Racing Series championship, but his 23 victories and 34 top-five finishes topped the Crate Late Model organization. Overall he won 34 races in 52 starts during his career-best season.

We’ll also honor more drivers next week with our state-by-state review of the season. We cover the Midwest (Dec. 17), South (Dec. 18), North (Dec. 19) and West (Dec. 19) starting with the top performers from each state.