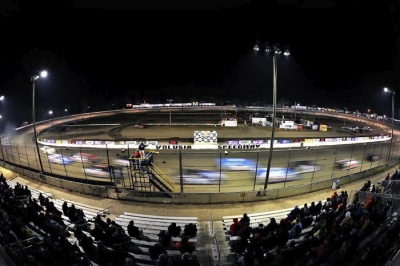 Volusia's DIRTcar Nationals will be broadcast live on DirtonDirt.com in 2013. (thesportswire.net)

BLOOMINGTON, Ill. (Dec. 6) — The online broadcast of the Late Model portion of the UNOH DIRTcar Nationals Presented by Summit Racing Equipment is set to reach its largest audience ever in 2013 thanks to a partnership between DirtonDirt.com and DIRTVision.com. The two online broadcast providers have partnered to produce a pay-per-view broadcast of the six-night miniseries scheduled for Feb. 18-23 at Volusia Speedway Park in Barberville, Fla., with both websites broadcasting the event live to worldwide audiences.

Six nights of live racing action from Volusia’s half-mile oval kicks off Monday, Feb. 18 with the opening night of the Super Late Model portion of the DIRTcar Nationals’ two-week schedule. Six cameras will bring viewers unmatched coverage of all of the week’s racing, which includes three UMP DIRTcar-sanctioned events Feb. 18-20 followed by three events for the World of Outlaws Late Model Series Feb. 21-23. The broadcast will also include every lap of the week’s support division action, which features UMP Modifieds Feb. 18-19 and the Big-Block Modifieds of the Super DIRTcar Series Feb. 20-23.

DirtonDirt.com founder and CEO Michael Rigsby brings with him not only a wealth of knowledge in the video and broadcast industry, but also a professional video production crew that has delivered successful broadcasts of the World of Outlaws-sanctioned USA Nationals at Cedar Lake Speedway and the Wild West Shootout miniseries at Tucson International Raceway. The additional resources provided by DirtonDirt.com will increase that quality of the broadcast for viewers tuning in via either website.

World of Outlaws announcer Rick Eshelman will be joined by veteran announcer Ben Shelton to call all of the action from Volusia with each night’s broadcast also featuring pre- and post-race shows, driver interviews throughout the night and instant replays of all of the event’s thrills and spills.

More information on the UNOH DIRTcar Nationals Presented by Summit Racing Equipment is available at www.dirtcarnationals.com or www.volusiaspeedwaypark.com.