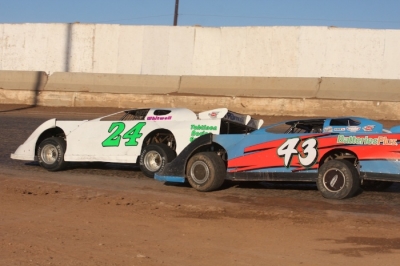 Whitwell collected $5,000 from the race purse of Tucson's three-day weekend along with a $1,500 bonus posted by an anonymous sponsor. | Slideshow

Whitwell took the checkers ahead of Lonnie Parker Jr. of El Mirage, Ariz., and pole-starting Don Shaw of Ham Lake, Minn., who both picked up $1,200 preliminary victories in Friday and Saturday’s action at the 3/8-mile oval.

John Cornell of Waddell, Ariz., was fourth and Dean Moore of Grand Junction, Colo., rounded out the top five in the unsanctioned event. Garrett Alberson of Las Cruces, N.M., pressured Whitwell from his runner-up spot but spun after making contact with the leader late in the race.

The feature was slowed by five cautions, all in the final 25 laps.

Notes: Whitwell’s Mike Tahtinen-owned GRT Race Car is sponsored by Sierra Mining & Crushing and Tahtinen Racing Engines. ... Whitwell finished fourth and second in preliminary features the previous two evenings. ... The 74 laps were in honor of the No. 74 Carl Trimmer previously drove. ... Nick Bartels piloted Bill Bartels' No. 77 on Sunday. ... Late Models return to Tucson for six DIRTcar-sanctioned events Jan. 12-20 at the DIRTcar Winter Extreme, and event expected to draw more than 50 Dirt Late Model teams from around the country.