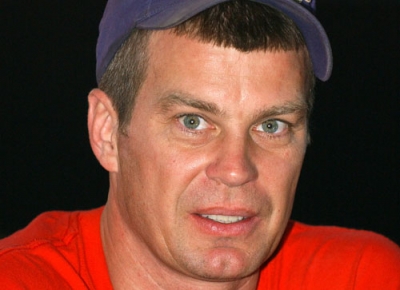 "The way they're talking, everything's going to be just fine," Brooks said in a telephone interview. "The doctors said we're 100 percent confident this is going to fix you."

While doctors found Rice "healthy as a horse" in examinations, they didn't decide on implanting the pacemaker until a test revealed that his heart, on one occasion, stopped beating for 50 seconds, revealing the issue that apparently had caused the blackouts.

Since being hospitalized, Rice recalled winter nights when he'd wake up in a sweat, Brooks said, thinking those might have been the first episodes related to his health problem. But Rice suffered a full-fledged blackout on April 25, the day before racing at Florence (Ky.) Speedway, where he finished second.

"He had an episode last Friday, and he was kind of worried about racing on Saturday, but he went ahead and raced," Brooks said. But another four or five blackouts on Sunday or Monday sent Rice to the hospital for treatment.

Initial tests didn't discover any problems, and doctors considered sending Rice home on Tuesday. "Nobody could give them any answers for a couple of days," Brooks said. But an EEG, which measures electrical activity produced by the brain, revealed the 50-second lapse in Rice's heartbeat and tipped doctors on the solution of implanting a pacemaker.

Once cleared by doctors, Rice should be able to return to his normal lifestyle, including racing, Brooks said. They advised Rice to wear a pad protecting the center of his chest under seat belts in a race car or even a passenger car, the car owner added.

Fans can send emails of well-wishes to the 2006 North-South 100 runner-up through the team website. — Todd Turner

COLUMBUS PROMOTER RECOVERING FROM HEART SURGERY: Johnny Stokes, long-time dirt racer and promoter of Columbus (Miss.) Speedway, is recovering from April 30 double-bypass heart surgery at a Columbus hospital. Stokes checked into the hospital Sunday, April 26, after suffering chest pains. He's expected to go home in a day or two and must take it easy for a month or so, but the Columbus Speedway staff will keep everything rolling at the track, which is scheduled to run the $5,000-to-win John L. Cliett Memorial on May 10. — Ben Shelton

NORTHERN ALLSTARS TRI-TRACK CHALLENGE SET: Any driver who can sweep the Northern Allstars Late Model Series Tri-Track Challenge can earn $28,000, including a $10,000 bonus for winning each of the three races at Paducah (Ky.) International Raceway, I-55 Raceway in Pevely, Mo., and for the first time, Macon (Ill.) Speedway. The three-race weekend is scheduled for May 30-June 1 with each race paying $6,000 to the winner. Last year's race winners were Kevin Cole of Harrisburg, Ill., Brian Shirley of Chatham, Ill., and Dennis Erb Jr. of Carpentersville, Ill. Shannon Babb of Moweaqua, Ill., is the only driver to sweep all three events in the six-year history of the miniseries. — From series reports

KORTE STILL RECOVERING FROM BACK INJURY: Two-time UMP weekly champion Randy Korte of Highland, Ill., who broke a vertebra in his mid- to upper back in a February racing accident at Florida Speedweeks, won't be back in action until mid-May at the earliest. Korte is scheduled to visit the doctor again May 13, but he's trying not to be overanxious. “I don’t want to rush it,” the 42-year-old Korte said. "If the doctor says I need to heal up more, there’s nothing I can do but listen." Korte hasn't kept his racing team in mothballs, however. Billy Faust of Lebanon, Ill., won an April 5 race at Highland Speedway in Korte's car and four-time UMP champ Rodney Melvin of Benton, Ill., will drive the No. 00 until Korte returns to the cockpit. — Kevin Kovac

TYLER COUNTY BEEFS UP MAY 3 PURSE: Tyler County Speedway in Middlebourne, W.Va., has decided to post a $2,500 winner's purse for its May 3 Super Late Model feature following the cancellation of the Independent Racing Series event at Wayne County Speedway in Orrville, Ohio. The IRS competitors are scheduled to race May 2 at Elkins (W.Va.) Motor Speedway. "We all knew it was too late to pick up the cancelled Saturday date, but also realized there were a lot of good racers would be in the area who no longer had a Saturday night show," said Tyler County co-promoter Brian Ferrell. "With the price of fuel being what it presently is, and knowing they would be coming to Tyler County later this summer, we figured many would appreciate a chance to run nearby for some good money before heading home." — From track reports

DELLINGER STILL SUBBING FOR BLOSE: With Mike Blose of Dayton, Pa., sidelined after shoulder surgery in March, fellow Pennyslvania driver Alan Dellinger has driven Blose's No. 5 Rocket Chassis successfully in recent weeks. Dellinger won the April 25 feature at Lernerville Raceway in Sarver, Pa., making Blose's spectating easier to accept. "I'm in no hurry. Whenever I'm ready, I'll go back," the 50-year-old Blose said. "Alan's doing a good job for me. ... he's a good driver." Blose's right shoulder had bothered him the past four years, but doctors initially thought it was arthritis or other inflammation. "It kept getting worse and worse" recently, Blose said, and closer examination revealed a bone infection that required surgery. Blose is still taking antiobiotics to treat the shoulder and is scheduled to return to the doctor for another checkup May 8, when he might get the OK to begin racing again. — Todd Turner

ODDS AND ENDS: Bolivar (Mo.) Speedway, which ran as a dirt track from 2002-2007, plans to reopen this spring as an asphalt track under new promoter Bill Allen. Weekly Late Models aren't on the schedule. ... The O'Reilly Southern All Stars will enforce amended 2008 body rules beginning with its May 17 event at Cleveland (Tenn.) Speedway. The grace period for illegal nosepieces, fender flares and filler panels will lapse before that event, series director Kelley Carlton said.