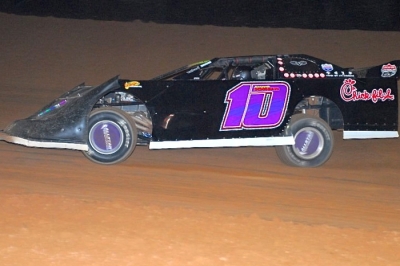 Taking advantage of the race’s only restart, the 19-year-old Joiner used a high-side rally to move past second-running Stephen Brantley of Monroeville, Ala., and race-long leader Shep Lucas of McKenzie, Ala., on lap 12, then dominated the remaining distance of the 35-lap Super Late Model event. Joiner built more than a half-track advantage on his way to earning a $1,500 payday for his eighth overall victory of the season.

“It was good to get a win here at the end of the year,” said Joiner, the 2011 Southern Raceway track champion who won six races at the track this season in just eight appearances. “We’ve had a couple bad runs when we traveled off the past few weeks. It’s good to come back home here and get our confidence built back up at the end of the year.”

Joiner’s topside rally made for a rare sight at the Pensacola-area racetrack. Known for its dominant bottom groove, Southern’s 3/8-mile oval rarely produces high-side passes among the leaders.

But after riding behind Lucas and Brantley for the first 11 laps, the third-starting Joiner made the top work when he charged hard into turn one on the restart. He then raced ahead of Brantley in turn two and pulled alongside Lucas down the back straightaway. Another hard charge into the corner in turn three gave Joiner the momentum he needed to complete the race-winning pass exiting turn four.

Joiner never looked back from that point, lapping all but Lucas and Brantley in claiming the convincing victory.

“We didn’t really have anything to lose,” Joiner said of his decision to try the top on the restart. “I knew we pretty much had at least third locked up, but then, I didn’t really come out here to run third tonight. We got that caution and I knew I had to go. It stuck pretty good in one and two so I decided to stay with it in three and four. Shep stayed to the bottom and gave me most of the groove, and I was able to come on off of there ahead of him.

“That was pretty special. We’ve passed guys around the top here before, but to do it against Shep and Brantley, that’s something else. They’re two of the best I race with around here.”

Lucas led the early portions of the main event from the pole, but he couldn’t fend off Joiner’s furious charge following the lap-11 restart. He settled for second, just ahead of Brantley.

“I never expected him to be coming around there like that,” said Lucas, a multi-time Late Model champion at Southern who has competed part time at the track over the past few seasons. “At Southern, it’s kinda common sense that you just protect the bottom. I was down about as low as I could go. I guess I was really just too low and gave him too much room, cause he had it going on up there.”

Attempting to compensate for the track’s rough surface, Lucas made some adjustments before the feature that he felt may have ended up hurting his chances at winning.

“My car was fast all night long,” said Lucas, who posted the fastest qualifying lap recorded at Southern this season when he topped time trials earlier in the evening. “I just made some changes right before the feature and we went backwards. I was hitting them holes so hard; I put a stiffer spring on the right-front for the feature and just didn’t have no side bite. But Joseph was so fast though, I don’t know if I could held him off even if I had my car right.”

Tyler Allen of Navarre, Fla., and Bo Odom of Flomaton, Ala., rounded out the rac’es top five finishers.

Notes: Joiner drives a MasterSbilt Race Car with sponsorship from Cifra Construction. … The lap-11 caution was caused when Matt Perry came to a stop against the wall at the exit of turn four. … Randy Polk of Harold, Fla., wrapped up Southern’s Late Model track title in October but didn’t compete in Saturday’s event. ... Southern Raceway plans to return to action in February with its annual Winter Nationals event.