From team and staff reports 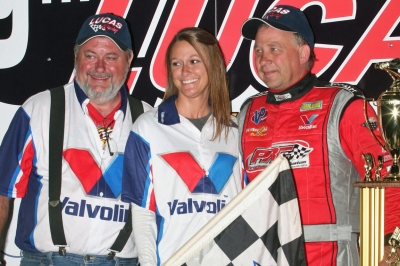 The blending of the Clint Bowyer Racing and Barry Wright house car teams moves Steve Francis into Bowyer’s primary No. 15 and leaves Jonathan Davenport looking for a ride.

The Clemmons, N.C.-based team announced the two-year deal Wednesday afternoon as one of Dirt Late Model racing’s most powerful teams joins forces with the Wright, the Hall of Fame chassis builder from Cowpens, S.C. | Blog

“We’ve built a great relationship with Barry Wright this year and the opportunity presented itself to build together for the future,” Bowyer said in a team release. “With the addition of Barry and Lance Wright and Steve Francis behind the wheel I’m as excited as ever for our teams to make a run at the Lucas Oil Series championship.”

Georgia Boot signed on for two more years of sponsorship for Francis and Jared Landers of Batesville, Ark., who will remain behind the wheel of the team’s No. 5 car.

“We’re excited about expanding our relationship with Clint Bowyer Racing and to strengthen our house car program with two drivers next season,” said Barry Wright, whose son Lance serves as his right-hand man. “I’m looking forward to racing for the championship with Steve and Jared. Clint has a passion for Dirt Late Model racing and his involvement makes the partnership fun and exciting.”

The 45-year-old Francis, who has more than 200 career feature victories in a 30-year career, is replacing a seat occupied by Davenport for the second straight season. When Davenport left the Barry Wright house car team in 2011 to join Bowyer, Francis joined Wright’s crew.

“I’m looking forward to continue working with Barry Wright and really excited to join Clint Bowyer Racing,” Francis said. “Clint and I have been friends for a while, and I know how much he loves dirt racing. He’s got a first-class operation and a lot of great people in place.”

Bowyer’s team thanked Davenport for his hard work and dedication to the team. The 29-year-old Davenport, who became a father Friday when girlfriend Rachel Patterson delivered Blane Thomas Davenport, didn’t want to comment about Bowyer’s decision when contacted by DirtonDirt.com.