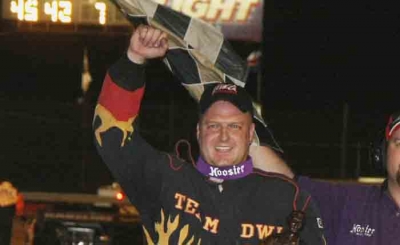 QUINCY, Ill. (April 30) — Hometown driver Denny Woodworth saw a lot more of the back of the field than he wanted to before he saw the checkers fly at Quincy Raceway. Woodworth maintained a sometimes tenuous lead the last 44 times around the track in the 50-lap Deery Brothers Summer Series main event, holding off Mark Burgtorf of Quincy and then Tom Darbyshire of Morning Sun, Iowa, to capture his first career victory on the tour for IMCA Late Models. He earned $2,000 in the Wednesday night special. | Slideshow | Nezworski wins at 34 Raceway

After threatening to run away from the pack, Woodworth was slowed by backmarkers at midway and again late in the race. Cautions came out as the field tightened both times to take the tail enders out of play and Woodworth pulled ahead on the resulting re-starts. Outside front-row starter Mike Garland of Morrison, Ill., ran in front the first six laps before giving way to the third-starting Woodworth, who caught up with the back of the field by the 18th circuit. Burgtorf and Darbyshire made up ground as Woodworth looked for a clear path.

The first yellow erased that traffic jam and Darbyshire slipped around Burgtorf to head the pursuit. Woodworth built a comfortable margin before catching up to the back again. Darbyshire pulled alongside with three laps to go but couldn’t complete the pass and ended in second. Burgtorf, Garland and Quincy's Robby Warner rounded out the top five and Boone McLaughlin bounced back from a tough Tuesday night showing at 34 Raceway for sixth.

Notes: Woodworth's winning car is sponsored by Fastenal, Denny Woodworth Attorney-at-Law and Pepsi. ... Woodworth became the fourth different winner in the four series events held so far this spring, joining Mike Collins and Andy Nezworski as first-time victors. ... Nezworski won the previous night in West Burlington, Iowa. ... Justin Reed of Quincy qualified from his consolation race and moved up 12 spots to finish seventh. ... Series points leader Todd Cooney was 14th. ... The fifth of 17 stops on the 2008 tour is also on a Wednesday, May 21, at Highway 3 Raceway in Allison, Iowa. ... Boone (Iowa) Speedway hosts its traditional Memorial Day show on May 26.