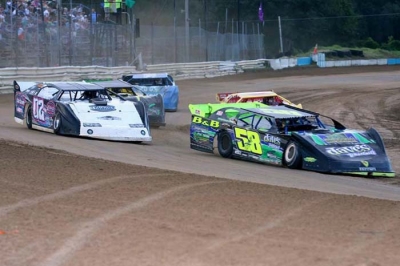 As the 2012 season draws to a close, drivers and fans already looking ahead to next year will find a busy Georgia-Florida Speedweeks schedule taking shape.

With 19 events scheduled at six tracks in 16 days, the 2013 version of the Dirt Late Model world’s annual February journey south will once again produce a busy stretch of racing for both race teams and fans. Only this year, anyone looking to maximize their trip by attending as many events as possible won’t have the luxury of a night off — at least not without the help of Mother Nature. | February 2013 schedule

In hosting its first Speedweeks event in more than a decade, North Florida becomes the latest Sunshine State track to attempt to carve out a place in the busy Speedweeks schedule. It follows a path recently taken by Bubba Raceway Park, which first hosted a single event in 2011 on the Sunday between traditional Speedweeks miniseries at East Bay Raceway Park in Gibsonton, Fla., and Volusia then expanded in 2012 with four events that went head-to-head with East Bay’s final four nights. This year, BRP has cut back to three events highlighted by a $20,000-to-win finale.

UMP DIRTcar director Sam Driggers is confident North Florida’s single event this year will be successful, which could lead track owners Phil and Liz Guadagno to add more Speedweeks races at the 49-year-old race facility in 2014.

“I think it’s going to be a good turnout. Guys that drive down to Florida, they’re down there, so they want to race,” Driggers said. “It’s definitely something that could grow in the future. They’re just getting their feet wet to see what it’s like. They want to see how the track holds up and what the drivers think about it. But I definitely I think it’ll be successful.”

Drivers will certainly have plenty of chances to race, but as Lucas Oil Late Model Dirt Series regular Jonathan Davenport of Blairsville, Ga., points out, that doesn’t mean they’ll all be champing at the bit to hit as many races as possible.

“Everybody’s trying to get their piece of the pie there,” Davenport said. “They think if they can fit in a race that makes sense for going from point A to point B, somebody oughta be able to stop in the middle. But even though everybody’s anxious to get back going again, sometimes all those races can be too much for drivers and crews.”

Hall of Famer Billy Moyer of Batesville, Ark., was among the most active drivers during last year’s Speedweeks, but even he isn’t thrilled by the prospect of 16 straight nights of racing.

“It’s just tough to run that many nights in a row and keep your equipment up,” said Moyer, who was just one of three drivers to compete at five of the six tracks that hosted Speedweeks events last season. “I don’t know that you’re gonna see very many guys that will try to run all that deal. I know I don’t see that happening for me.

“If everything’s going good car-wise and nothing’s breaking or falling apart, that’s not bad to run as much as you can run and make more money. But if you’ve got work to do, it definitely gets rougher.”

The limited window for Speedweeks events will once again produce conflicting dates.

In Georgia, Screven and Waycross (Ga.) Motor Speedway go head-to-head for the second straight year on Feb. 9 with Waycross hosting its lone Speedweeks event — an unsanctioned race paying $10,000 to the winner — on the same night as the second round of Screven’s World of Outlaws Late Model Series doubleheader. And in Florida, the first two nights of Bubba Raceway Park’s three-race weekend will conflict with the final two nights of Lucas Oil Series action at East Bay.

While conflicting events can present problems for tracks hoping to attract large fields and droves of fans, it can be beneficial for drivers by splitting fields.

“Drivers definitely aren’t complaining about that,” said Davenport, who scored Speedweeks victories last year at Waycross and Golden Isles Speedway in Brunswick, Ga. “It kinda splits up the field and maybe makes the competition level not quite as tough. But if the tracks can afford to do it, that’s great because more drivers have a chance to make money.”