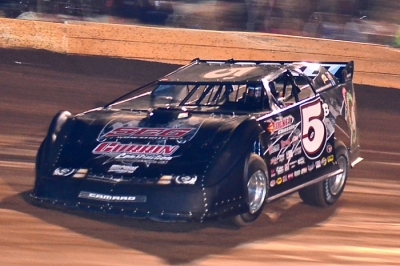 Tires used by both fast qualifier Mike Marlar of Winfield, Tenn., and third-fastest qualifier Chris Madden of Gray Court, S.C., were determined to have unapproved chemicals when test results were six times over the legal amount, according to race tech inspector Tim Sims. Eric Jacobsen of Seacliff Beach, Calif., was also disqualified due to testing conducted prior to qualifying.

“It’s very frustrating,” Marlar said. “I take pride in being an honest guy and in doing what I say I’m gonna do and what I’m supposed to do.

“I’ve worked my whole career and the value of me as a racer to a car owner or whoever depends on what I can do honestly. It just really disheartens me to get accused in a situation like this.”

Marlar talked in length of his disqualification while Madden used few words but clearly let his displeasure be known. Marlar loaded up and left the track following Saturday’s events, but Madden, a former National 100 winner, said he plans to start from the tail of a consolation race Sunday.

Both drivers discredited the test results, claiming that tech officials didn’t carry out the testing procedures in the correct manor.

“We signed something saying we’ll agree with whatever the sniffer says, but they have to run the sniffer right,” Marlar said. “I mean, they got a guy over there blowing in it, and then they stick it on your tire. Then he takes it and mashes the air back out of it against the front of his shirt. Then it’s over to the next guy to (test his tire) then back to you. These guys just don’t know what their doing. They should never throw you out on that.”

Head tech inspector Tim Sims, the competition director with the NeSmith Crate Late Model Series who East Alabama contracts to run their tech for major events, stood behind his testing methods and his decision to disqualify all three drivers.

“I’ve been using the sniffer to check tires for over five years now,” Sims said. “I’ve got a process that I use to check tires that I’ve used every time I’ve checked tires whether it’s (with the NeSmith Series) or when I’m hired to check tires here.

“I checked over 100 tires between the three Late Model classes already this weekend … I’ve only had three that’s checked wrong.

Both Marlar and Madden said they requested to have their tires tested by a chemical testing lab, as is the case for many Dirt Late Model tours, but Sims said he doesn’t use lab testing because, in his experience, the sniffer is always correct.

Sims addresses driver’s complaints about the process he used to check tires, which among others were that he blew he into the bag used by the sniffer just before checking the tires and that he used the same bag to check all drivers’ tires.

“I did blow in the bag and I held it to the sniffer to make sure it cleared the bag out,” Sims said. “I got a bad reading on the 44 car and to give him the benefit of the doubt, I sent my helper over here to get a clean bag that hadn’t had any air in it in six months. It got the exact same reading.”

Marlar was greatly disappointed as he prepared to leave East Alabama Saturday night, not only because his chances of contending in the event were dashed but also because he felt the disqualification unfairly called into question his credibility as a racer.

“We know there’s events you go to that’s shady. We know that. We still go to them and hope they’ll do the right thing and treat ya right,” Marlar said. “I worked hard to be a good racer and I’ve came up from the bottom of racing to the top of racing. It just disheartens me for somebody to knock your legs out front under ya.

“We’ve won with (the Lucas Oil Late Model Dirt Series) and tires were sent (to a lab) and were fine. Places like this here … they do what they wanna do to you when they wanna do it, and it just makes you not wanna race. I love racing, but if I have to do this every week, I’d just have to take up golf or something I guess.”