Phillips gets another chance to match dad 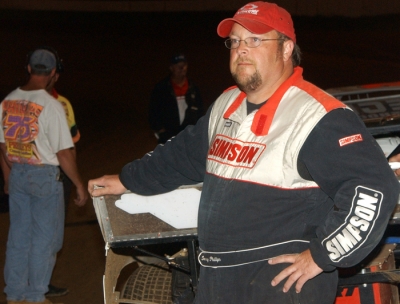 Ask Terry Phillips what winning one of the World of Outlaws Late Model Series events being run in his Missouri backyard this weekend would mean to him, and you get a typical hard-nosed racer’s reply. “It would be a great accomplishment,” Phillips said matter-of-factly. “You always want to win against the better cars and drivers.”

Remind Phillips, though, that a WoO victory May 3 at I-44 Speedway or May 4 at Monett Speedway would forge him a historic common bond with his legendary late father Larry Phillips, and his tough exterior softens a bit. “I didn’t even think about my dad having a World of Outlaws win,” said Phillips, a 41-year-old racing veteran from Springfield, Mo. “That would make winning one pretty cool for me.”

How cool? Consider this: Larry and Terry Phillips would become the first father-and-son tandem to win WoO events in the six-plus seasons (1988-89, 2004-present) of the tour’s existence.

Larry Phillips, a Midwestern superstar who died in September 2004 at 62 after a four-year battle with lung cancer, won a single WoO event during his memorable dirt and asphalt Late Model career, but it was an important one. He captured the first WoO event contested April 22, 1988, at Williams Grove Speedway in Mechanicsburg, Pa.

The elder Phillips’s triumph launched the short-lived first incarnation of the WoO, which was directed by Ted Johnson. The full-bodied offshoot of the established WoO sprint car series lasted just two seasons before it was discontinued by Johnson, but its results are part of the history of the WoO, which was rekindled in 2004 under the World Racing Group banner and is now in the fifth season of its modern era.

The original WoO didn’t travel as far-and-wide or boast as many events as the current version, but it was “a pretty tough series,” said Terry Phillips. He knows this first-hand because he actually followed the inaugural schedule in 1988.

Phillips became a dirt Late Model driver in ’88, at the age of 21, and got an education by going on the WoO road with his father. He showed some flashes of his future brilliance during that rookie campaign, registering four top-five finishes — including third-place runs at Badlands Raceway in Yates Center, Kan., and Colorado National Speedway in Denver (two) — and finishing a respectable seventh in the points standings. (Larry Phillips finished third in the ’88 points race.)

Both Phillips and his father were part-timers with the WoO in 1989 (Larry and Terry placed 11th and 14th, respectively, in the points standings), and the younger Phillips has entered only selected tour events since its resumption in 2004. In eight feature appearances during the WoO modern-era, Phillips has a top finish of third, on July 22, 2005, at Tri-State Speedway in Pocola, Okla., but he’s had a couple legitimate shots at victory ripped from him by bad luck, including last year at Lakeside Speedway in Kansas City, Kan. (a broken brake caliper sent him into the wall while running fourth and gaining ground) and I-44 Speedway (he was in the top five when he got a flat tire).

A three-time champion of the O’Reilly MARS DirtCar Series that is co-sanctioning the WoO events at Lebanon I-44 and Monett, Phillips enters the doubleheader with plenty of confidence. He’s only run two dirt Late Model shows since making a January trip to Arizona — the testy spring weather has scuttled most of his planned starts with his Andy’s Frozen Custard GRT No. 75 — but he’s in racing shape thanks to the half-dozen open-wheel modified appearances he’s made in recent weeks. And of course, Phillips knows the I-44 and Monett ovals as well as anyone.

With plenty of laps around both tracks under his belt over two decades behind the wheel, Phillips has enjoyed spectacular success in regional-series competition at the speedways. He’s won seven MARS and two O’Reilly MLRA series features at Lebanon I-44, and he owns six MARS and eight MLRA triumphs at Monett. Considering that most of this weekend’s invading national stars have only limited experience at I-44 (Saturday will mark the fourth WoO visit to the track) and next to none at Monett (Sunday is the tour’s first-ever stop there), Phillips would appear to have a technical edge. He’s not counting on his knowledge of the distinctly different 3/8-mile ovals to carry him, however.

“I guess we’ll have a little experience advantage,” said Phillips, who will also field a car from his stable this weekend for his 21-year-old protege Jeremy Payne, a native of Arizona who now calls Springfield, Mo., home. “But these guys coming in are so good, it doesn’t take them long to figure a track out. And the tire-rule deal hurts us a little because we’re not used to running the softer tire, but I feel like I should still be able to pick the right compound. I’ve been doing this long enough so I should know what to do.”