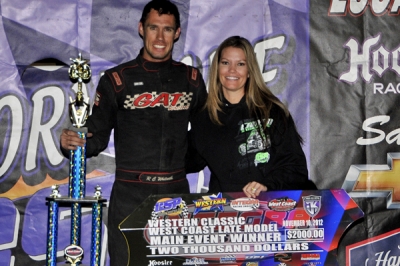 Whitwell, who spent most of 2011 and the early part of 2012 racing for a Missouri-based team, earned $2,000 for winning from outside the front row.

Lonnie Parker Jr. of El Mirage, Ariz., who started on the pole and extended his SWDRA points lead, settled for second with Clay Daly of Watsonville, Calif., third in wrapping up his second straight West Coast Shootout title.

Joey Moriarty of Phoenix, Ariz., was fourth and Jason Papich of Nipomo, Calif., rounded out the top five in the 23-car field. Saturday's race was the lone Late Model feature of the weekend after Friday’s action was rained out.