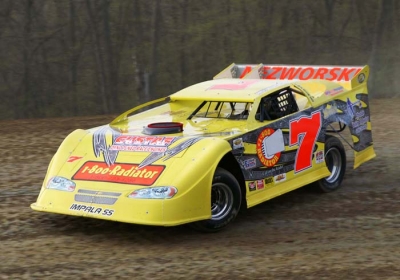 WEST BURLINGTON, Iowa (April 29) — Andy Nezworski has a new highlight for his Deery Brothers Summer Series career. The Buffalo, Iowa, driver led all 40 laps en route to the checkers Tuesday evening at 34 Raceway. The $2,000 victory, his first-ever on the tour for IMCA J & J Steel Late Models, also made Nezworski the third different winner in as many series events to beat the weather so far this season. | Slideshow

Taking the point from outside row one, Nezworski had to hold off Justin Reed of Quincy, Ill., following five scattered cautions. Reed looked underneath several times but couldn’t complete the pass, staying close before falling off the pace with a couple laps left and following six lengths behind Nezworski at the finish. Rounding out the top five were three more Quincy drivers: Mark Burgtorf, Denny Woodworth and Lonnie Bailey. Series points leader Todd Cooney moved up 10 spots after qualifying from his consolation race to finish sixth.

The winner of the special Ironman race during last year's Pepsi USA Nationals at West Burlington, Nezworski pulled away from the pack with Reed in pursuit. The cautions and resulting restarts took most of the lapped cars out of the equation while Burgtorf, Woodworth and Bailey dueled for third.

Notes: The winner's car is sponsored by 1-800-Radiator and Gustaf Racing Engines. ... His best previous finish in 27 series starts was fifth last year at Iowa State Fairgrounds Speedway in Des Moines. ... His 2008 finishes were seventh and 10th. ... The event as a makeup from an April 12 rainout; the series is scheduled to make up another race April 30 at Quincy (Ill.) Speedway. ... Matt Ryan advanced 10 positions to finish 10th. ... Provisional starter Mike Klinkkammer advanced from 22nd to 11th.