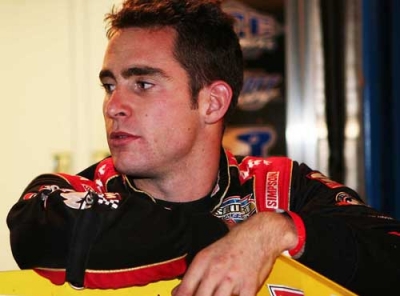 When the Mark Richards Racing Enterprises hauler shoves off from Shinnston, W.Va., to begin an 800-mile trip to Missouri’s Lebanon I-44 Speedway for a May 3 event, driver Josh Richards won’t be riding along. Instead, the 20-year-old star will delay his departure to the weekend’s pair of World of Outlaws Late Model Series events in the Show-Me State to make his debut behind the wheel of a big-block modified May 1 at Virginia Motor Speedway. Richards is scheduled to enter the Advance Auto Parts Super DirtCar Series season opener as a teammate to big-block standout Brett Hearn of Vernon, N.J., in the $10,000-to-win, 60-lap Paul Sawyer Memorial.

The Hearn-Richards pairing completes a gentleman’s agreement that Hearn made with Richards’s father in August 2005 when Hearn drove the Rocket Chassis house car in a WoO Late Model event at Lebanon Valley Speedway in West Lebanon, N.Y. “I’m pretty excited to drive a modified,” said Richards, who will pull double-duty on Thursday night at VMS by running the Ernie Davis-owned No. 25 dirt Late Model in the companion $5,000-to-win event for the division. “It’ll be real fun.”

Richards will fly into St. Louis on Saturday morning to meet his dirt Late Model team, which will already be at the Petroff Towing shop outside the city preparing to head out with fellow WoO driver Brian Shirley for tour events at I-44 and Monett Speedway. — Kevin Kovac

BIG MONEY COMING UP ON LUCAS OIL TOUR: Lucas Oil Late Model Dirt Series competitors will be battling for nearly $300,000 in total prize money with five events in four states over 15 days. On May 2-3 at Kentucky Lake Motor Speedway, a pair of $9,999-to-win events are scheduled. On May 9-10 at Lucas Oil Speedway in Wheatland, Mo., is the $40,000-to-win Super Clean Diamond Nationals, which carries a total purse of $133,000. The stretch wraps up May 16-17 with $10,000-to-win events at Farley (Iowa) Speedway and La Salle (Ill.) Speedway. — James Essex

WDRL ADDS CLAY COUNTY EVENT: The World Dirt Racing League has added a July 4 event at Clay County Speedway in Spencer, Iowa. The fairgrounds track's new grandstands can hold nearly 7,000 spectators and the oval has been cut into a wide 3/8-mile oval. A state-of-the-art Musco Lighting system has also been added. "The WDRL series will race at Eagle, Neb., the night before," series founder Jim Wilson said, "so it will be a great two days of racing for eastern Nebraska and western Iowa dirt Late Model fans." — Bucky Doren

NORTH DAKOTA TRACK EXCITED ABOUT WoO VISIT: The addition of Williston Basin Speedway in Williston, N.D., to the WoO's Wild West Tour gives the stretch nine $10,000-to-win events in six states and one Canadian province over a 13-day span. Williston Bay's July 13 event will be the richest-ever race at the third-mile oval in western North Dakota, 18 miles from Montana. “The whole area here is buzzing about a World of Outlaws race coming to town,” said Jack Blotsky, president of the Williston Basin Racing Association that operates the track. “We’re already looking at moving in some more bleachers to handle the crowd we expect that night.” — Kevin Kovac

MACS ADDS BEDFORD DATE: The Mid-Atlantic Championship Series has added a May 25 event at Bedford (Pa.) Speedway. The $5,000-to-win Late Model Spring Championship will be a 50-lapper at the 5/8-mile oval. MACS official Jeff Geesey said the track plans to added a few other races soon. — Jason Shank

WAYNE COUNTY CANCELS IRS DATES: Citing health issues, Wayne County Speedway promoter Ernie Coffman has cancelled the May 3 and May 26 Independent Racing Series events at the track in Orrville, Ohio. The next IRS event is scheduled for May 2 at Elkins (W.Va.) Motor Speedway. — Chris Tilley

MLRA CHANGES ADRIAN DATE: The O'Reilly Midwest LateModel Racing Association has moved Adrian (Mo.) Speedway's Jack Vaughn Memorial to May 17 from May 3. Some members of the Vaughn family weren't able to attend on the originally scheduled date. The next MLRA event is a Wednesday night special on May 7 at Lakeside Speedway in Kansas City, Kan., where NASCAR Sprint Cup driver Clint Bowyer and his dirt teammate Shannon Babb are expected to be in action. — From series reports

MACON, MORGAN COUNTY CONNECT FOR BIG 10 SERIES: Two UMP-sanctioned central Illinois tracks have combined to create the Midwest Big 10 Series. Macon Speedway and Morgan County Speedway in Jacksonville will run five races apiece that will count toward a miniseries points fund of $10,000. The champion will receive $3,000 and the top 10 drivers in points will be paid. Macon's dates: April 19, May 3, June 14, July 19 and Aug. 16. Morgan County's dates: April 18, May 2, June 13, July 18 and July 24. — From track reports

FRANK'S FLIPPED CAR ISN'T FINISHED: It’s going to take more than a wild, high-flying series of flips to put Chub Frank’s favorite race car out to pasture. Observers who witnessed the Bear Lake, Pa., driver's tumble midway through the Circle K Colossal 100 on April 19 at Lowe’s Motor Speedway in Concord, N.C., might've figured the machine was through, especially after Frank left most of the car’s crushed bodywork in the pit area for fans to scavenge. But Frank said most of the damage was to bolt-on parts and the frame of a car he calls "Old Faithful" is OK. He expects to have the car back in action for the May 16 WoO event at Attica (Ohio) Raceway Park. — Kevin Kovac