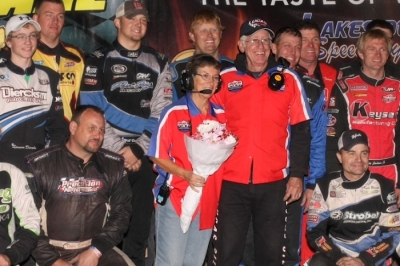 Saturday’s Lucas Oil Midwest LateModel Racing Association event at Lakeside Speedway in Kansas City, Kan., marked a special moment for Allen “Cowboy” Chancellor and his wife Harriett. The event not only meant the end of another successful season for the series; it also brought to end a successful 16-year run for the Chancellors as owners of the popular Missouri-based regional tour after title sponsor Lucas Oil Products announced that it had acquired the tour last week.

"I've enjoyed it, we both have," Harriett said of her and her husband’s time spent running the series. "Hopefully we've done it some good, too. We really had to work at it year round. It isn't just a summer thing for us. We met a lot of fantastic people along the way, too."

The Chancellors’ time guiding the series was full of hard work and success as they helped MLRA continue as one of the most successful regional tours in the country. When they took over the Ken Essary and Randy Mooneyham-founded tour in 1996, the series was without a title sponsor, but they brought on O'Reilly Auto Parts and later partnered with Lucas Oil Products, first as a presenting sponsor, then for the past three seasons as the title sponsor.

Saturday’s race at Lakeside marked the 551st feature race held by the series, making it third overall in events held among active Late Model tours. The Chancellors oversaw 355 of those shows, during which five different drivers scored series championships.

Leslie Essary and Rex McCroskey each notched one. With this year's title, John Anderson will have three. Alan Vaughn took four of his five, racing for Cowboy and Harriett. Al Purkey was the face of the series for many years while he scored all seven of his series championships in the 16-year time frame.

"Of all the series I raced, Cowboy and Harriett did it because they loved racing and not for the money," Purkey said. "Racers knew they were fair with everybody. They just genuinely loved the sport. It's going to be a sad time for sure."

The Chancellors will officially hand over the reigns to the tour to Lucas Oil Products following the Championship Banquet Nov. 20 at Harrah's Casino in Kansas City, Mo. Lucas Oil Speedway General Manager, Dan Robinson, was appointed series director. He and his staff will operate the series from their offices in Wheatland, Mo., continuing to build on the success the series found under the Chancellors’ direction. — Trenton Berry

Smoky Mountain Speedway in Maryville, Tenn., will end it’s a huge 2012 season with a bang Nov. 3 with three divisions of Late Models competing for handsome paydays at the 4/10-mile east Tennessee oval.

The season-ending Tearin’ the Tops off Triple Crown Brawl will not only be highlighted by the 18th and final Southern Regional Racing Series points event of the season but will also feature special events for Limited Late Models and Crate Late Models.

This will be the third appearance of the Tullahoma, Tenn.-based SRRS. Ray Cook of Brasstown, N.C., captured the tour’s event at Smoky Mountain on June 30 while Billy Ogle Jr. of Knoxville, Tenn., claimed victory on Aug. 11.

Ogle enters the event with a two-race win streak at Smoky Mountain after scoring a Southern All Stars Series victory Sept. 22. Cook also has two victories out of the track’s eight special events so far this season while Vic Hill of Mosheim, Tenn., leads the way with three victories and Mike Marlar of Winfield, Tenn., has one. — Chris Tilley

Lernerville Speedway in Sarver, Pa., will host the fourth annual DIRTcar Roundup Steel City Stampede this weekend and for the first time, the Crate Late Model portion of the 10-division event will be sanctioned by the Sweeney Chevrolet Buick GMC Fastrak tour as the $2,000-to-win event marks the tour’s season finale.

With his fourth series title already wrapped up, Max Blair of Centerville, Pa., enters the event as a heavy favorite, but he’ll have to contend with former Lernerville stock car champion Mike Pegher Jr. of Wexford, Pa., who would like to outrun Blair in the tour’s final event after finish second in the final points standings for the third straight year.

The event will be Fastrak’s first appearance at Lernerville since its first visit to the track on May 30, 2011, when Blair won topped 46 entries for a $1,500 victory in the Bill Emig Memorial. — Mike Leone

The Southern United Professional Racing tour gets back to action after a nearly two-month break with Saturday’s Spooky Hill event at Boothill Speedway in Shreveport, La. Hometown driver Ray Moore is looking for his fifth series victory of the season after also winning at Boothill on June 30. … Luke Roffers of Concord, N.C., will attempt to wrap up his first Carolina Clash Sjper Late Model Series championship in the tour’s season-finale Saturday night at 311 Motor Speedway in Madison, N.C. Roffers leads Jeff Smith of Dallas, N.C., by 21 points heading into the $4,000-to-win event. … Willard (Ky.) Speedway and 201 Speedway in Sitka, Ky., have announced a $500 bonus for any driver winning sweeping Friday’s Black Jack Memorial at Willard and Saturday’s Halloween 50 at 201. The bonus brings the possible payday between the two unsanctioned events to $5,500. … Southern Raceway in Milton, Fla., has added a late-season Super Late Model event for Nov. 17. ... January’s Wild West Shootout at Central Arizona Raceway in Casa Grande, Ariz., will run five races instead of six. The $10,000-to-win finale has been moved up one day to Jan. 12.