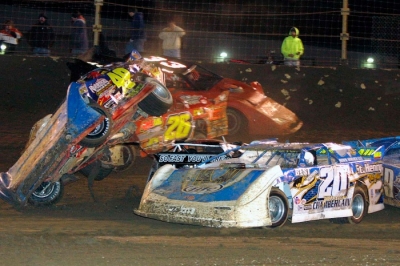 The race was marred by a first-lap pileup in turn one that sent Brian Ruhlman’s car briefly airborne and involved nearly half the cars in the 20-car field. Kevin Weaver and Bill Lewis were among the drivers eliminated from the event.

Other failed attempts to start the race resulted in a single-file start with J.R. Hotovy of Covert, Mich., out front with Brandon Thirlby of Traverse City, Mich., in pursuit followed by White, Vochaska and Hough.

Hotovy entered lapped traffic after 10 laps as Thirlby gave chase and Vochaska moved up to third. Just past halfway, Hotovy’s No. 13 jumped the turn-four cushion, giving Thirlby the opportunity to slip by and take command. Vochaska followed him to take the second spot.

After a caution for Duane Chamberlain, Thirlby went back to work out front, opening a five-length lead with Vochaska and Hotovy behind.

But on lap 17, the leading Thirlby tangled with lapped car, resulting in a flat right-rear tire and collecting Hotovy, ending the chances for both frontrunners.

Vochaska led the field back to green and opened up a 10-length margin with White and Jay Morris battled behind him. With two laps remaining, White-Morris contact brought out a yellow and Morris was sent to the tail. Vochaska held on the rest of the way for the victory.

Notes: Vochaska’s No. 34 is sponsored by Van Horn Construction and Sweet Mgf. ... The event drew 32 Late Models among 346 race cars overall. ... Brian Ruhlman won the night’s modified feature. ... Friday’s action for the 10-division event was rained out and rescheduled for Sunday.