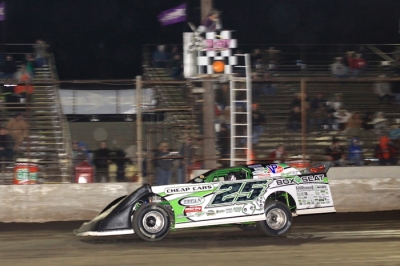 Feger picked up the pressure on race-long leader Randy Korte of Highland, Ill., follow a lap-nine restart and moved ahead for the lead midway through the unsanctioned event.

Feger never looked back as he diced his way through traffic en route to his ninth special-event victory of the season.

Michael Kloos of Trenton, Ill., got by Korte late in the race to claim the runner-up finish while Dewayne Kiefer of St. Genevieve, Mo., and Mark Voigt of Marine, Ill., rounded out the race’s top five finishers.

Kyle Logue of Cisco, Ill., won a heat race and ran up front early in the main event until a flat right-front tire took him out of contention.