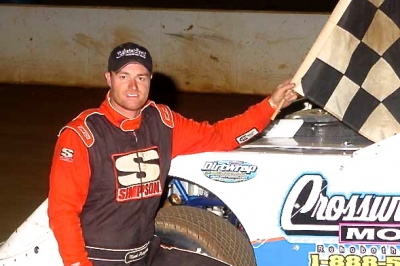 Pettyjohn and defending World of Outlaws Late Model Series champion Rick Eckert of York, Pa., paced the field to the initial start of the 50-lap unsanctioned event wth Eckert roaring into the race lead as the field exited turn-two on the opening lap.

Eckert’s lead would only last five laps as Pettyjohn snared the top spot at the completion of lap six. Pettyjohn then led the final 44 caution-free laps and held of a late-race charge by Satterlee to score a popular victory at the 3/8-mile oval.

“I’m speechless right now,” said Pettyjohn, who also won one of two preliminary features to earn an $1,000 and his front-row starting spot in the main event. “Just to race with guy’s like Rick Eckert, Jason Covert and all the good cars that are always here, and to beat them, I couldn’t be more proud.”

Satterlee settled for second with Covert, who earned $3,500 for winning Friday night’s Raye Vest Memorial tuneup event, was third. Dan Stone of Thompson, Pa., finished fourth while Eckert slid back to fifth in the event that honored his longtime car owner.

Notes: Pettyjohn drives a Swartz Chassis with sponsorship from Hitchens Bros. Trucking and Crosswinds Motel. … The victory is Pettyjohn’s second of the season at Winchester. … Eckert won the second of the two $1,000 preliminary features. … The event wrapped up Winchester’s 2012 season.