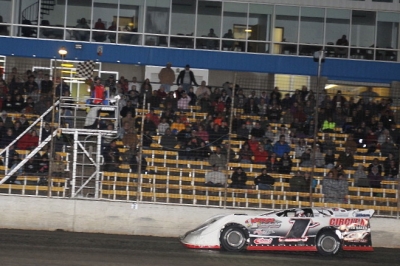 Will Vaught crosses the finish line for a $5,000 victory at Lakeside. (fasttrackphotos.net)

Surviving an early accident in his heat race, Vaught rallied from the tail to win his preliminary event to earn the pole starting spot for the night’s 40-lap main event. It was all smooth sailing from there, as Vaught got the jump on Mark Dotson of Cameron, Mo., on initial start of race and cruised the remaining distance for his second MLRA victory of the season and third of his career. | Video | Slideshow

"Starting up front at a place like this means a lot. I was fortunate enough to start on the pole tonight and the car was great,” Vaught said. “It didn’t start out very well. In the heat race we had that little incident and I really thought our night was ended then."

Brad Looney of Republic, Mo., worked up to the runner up spot early in the race and held off charges from Kyle Berck of Marguette, Neb., and Chris Simpson of Oxford, Iowa. Looney was able to narrow the gap between he and Vaught at times, but never seriously challenged for the lead.

Berck, who earned a $3,000 victory Friday night at Lakeside, rolled past seven cars to finish third. He never really had much breathing room as he was constantly around other cars for position.

Simpson pushed forward form 11th to finish fourth for his second top-five finish of the weekend while Ryan Gustin of Marshalltown, Iowa, passed nine cars to round out the top five finishers in a rare Late Model start for the open-wheel modified ace.

John Anderson of Omaha, Neb., had a disappointing night with a 24th-place finish, but because he came tour’s final weekend with a enormous point lead, the veteran driver was able to lock up his second consecutive MLRA championship.