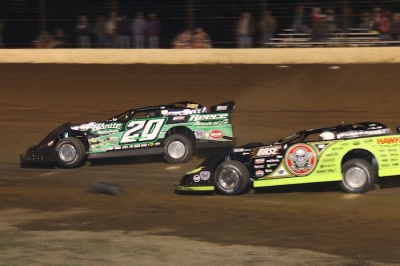 The 40-year-old Owens led all but the first lap of the 100-lap series finale in putting an exclamation point on his second straight championship season.

“It’s crazy. ... words can’t describe it. It’s just awesome,” Owens said in victory lane. "I’m glad the fans got to see it all. Just to have your name on that trophy with Ronnie Johnson, Scott (Bloomquist), Billy Moyer, those are people I grew up watching race, and it’s just awesome to be there with ‘em.”

Bloomquist was among the drivers futilely chasing Owens at the 3/8-mile oval at the confluence of the Ohio and Scoito Rivers that hosted the Carl Short-promoted event for the first time.

The pole-starting Bloomquist, whose back-to-back Lucas Oil titles came before the reign of Owens, finished second with Don O’Neal of Martinsville, Ind., in third as the top three drivers in series points cemented their success with top-three finishes in the finale. O’Neal’s third-place finish was good enough to secure second in series points.

Josh Richards of Shinnston, W.Va., took a break from his NASCAR pursuits with a fourth-place finish and local favorite Ben Adkins of West Portsmouth rounded out the top five finishers.

Portsmouth hasn’t been among the favorite tracks for Owens, but a pressure-free performance played into his hands.

"You come in with no pressure on, we could try a few things, and that’s what we did,” said Owens, who made an outside move to take the lead on the second lap after the third-starting O’Neal blitzed Bloomquist at the outset. "We came in with a little different setup than we normally run. It paid off. It’s been good. We hot-lapped good, we qualified good, and we heat-raced good, and it carried on over in the feature for us.”

The only concern for Owens was his tire choice, but that was a moot point in the second half of the race when virtually ever driver settled into the preferred lower groove.

Bloomquist hoped to have more racing room after getting second for good from O’Neal on the 16th lap, but it became apparent that Owens was in the driver’s seat out front, even if Bloomquist could keep up.

“We went with the hardest left-rear tire of anybody in the field,” Bloomquist said. "I wasn’t surprised when we didn’t get (the lead at) the start, but I thought the track would widen out and get black and lot higher, and we could get going and there’d be a little bit more groove later in the race. But it ended up getting rubbered up in the bottom, and we just had to settle to stick it in there.

"He was smart enough not to get out of the bottom, and his tire definitely was enough to fire early. He jack-rabbited out there really good on the first start, and then, after that, we could start hanging with him. But even when he got to lapped cars, you could see he had trouble with them, so we were pretty much locked into second once the track got like that. He ran a good race.”

O’Neal fell far behind the top two midway through the race, but even when he tightened things up in the late stages, he could merely follow their tire tracks.

“We got a good start there. We just didn’t have a good enough race car to get the job done tonight,” said O’Neal, who was glad to hold off Bloomquist for second in series points. “Actually, when it rubbered up, it helped our car because we were too free when the racetrack was slick ... hat’s off to Jimmy and Scott and everybody. It’s been a good year.”

Notes: Owens drives a Mike Reece-owned Bloomquist Race Car with a Cornett Racing Engine and sponsorship from Reece Monument, Gantte Appraisals, Red Line Oil, FK Rod End and Sunoco Race Fuels. ... The winners was quick to thank crew chief Chris Fox along with crew members Chad Bryant, Jake Fancher and Mike and Amy Hayes. ... The feature was slowed by six cautions, virtually all for single-car incidents. ... Fifteen of 27 starters completed 100 laps. ... Dale McDowell of Chickamauga, Ga., was running in the top five when his nosepiece folded under shortly after a lap-36 restart. ... Brady Smith of Solon Springs, Wis., started 18th and ran as high as seventh before fading and retiring on lap 65. ... The event’s oldest entrant, 70-year-old Delmas Conley, pitted early and retired on lap 15. ... Local favorite Jackie Boggs of Grayson, Ky., who won the previous Lucas Oil Series stop at Portsmouth, got into the wall on lap 48 after breaking into the top 10.