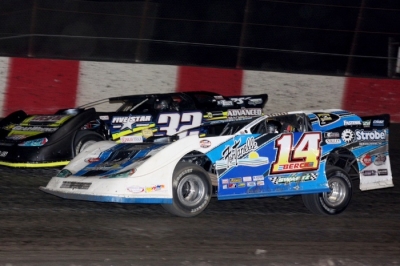 Kyle Berck (14) moves by Chris Simpson on his way to victory. (Ron Mitchell)

Berck claimed 16th overall victory of the season in topping Jesse Stovall of Galena, Mo., by a half straightaway at the finish of the 30-lapper. Chad Simpson of Mount Vernon, Iowa, rallied from the sixth starting spot to finish third, one spot ahead of his younger brother Chris, who faded after leading the first half of the race from the outside pole. Mark Dotson finished fifth after running as high as second early in the race.

The key for Berck proved to be a move from the bottom groove to the top early in the race that allowed his to chase down Chris Simpson and Dotson.

"The car's been really good lately," said Berck, who claimed his second MLRA victory of the season and 15th of his career. "I was fighting hard on the bottom and wasn't getting the job done early on. We just couldn't keep up. Chad and Dotson was getting out on me. We moved up, fell in line in third and ran 'em back down after a few laps."

Chris Simpson got the jump on Berck on the race’s initial start and pulled away in the opening laps while Berck slipped back to third behind fourth-starting Dotson.

The high-running Berck swept pass Dotson for second on lap 11 as the leaders entered lapped traffic and two laps later was looking under Simpson in turns one and two with Dotson attempting to make it three-wide in the extreme low groove.

Room ran short for the leads on the back straightaway when Simpson had to slow to avoid hitting a lapped. Berck slid into the back of Simpson, but both drivers continued running with Simpson holding onto the lead.

Berck turned back another challenge from Dotson over the next few laps, then ran down Simpson to make the winning pass through turns three and four on lap 16.

Berck survived another close call in traffic on lap 24 and kept a hard-charging Stovall in check in the closing laps to earn his second MLRA victory of the season.

“The car was really maneuverable,” Berck said. “That kinda surprised me I guess because the track was really top-side dominant. But the middle part of the race we could run on the bottom or the top and that was key getting through traffic and getting the lead.”

Notes: Berck’s sponsors include Strobel Manufacturing, Fontanelle, Wegner Automotive Research and Bosselman Oil. … The event marked the 550th race in the 23-year history of the Lucas Oil MLRA tour, which earlier this week was purchased by Lucas Oil Products from Harriett and Allen “Cowboy” Chancellor. … Current Lucas Oil MLRA point's leader, John Anderson of Omaha, Neb., had to race his way into feature through a conslation race, but rallied from 21st to sixth to earn the race’s KRC Hard Charger Award. … The series returns to Lakeside Saturday night for a $5,000-to-win event that wraps up the tour’s season.