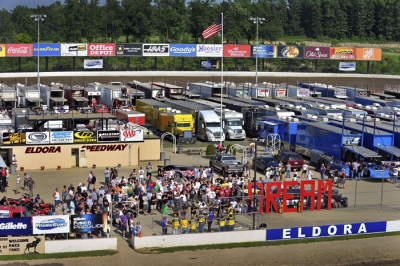 ROSSBURG, Ohio (Oct. 17) — After tweaking formats for its biggest Dirt Late Model races in 2012, Eldora Speedway plans even bigger — and richer — changes next year in celebrating the 60th anniversary of the Tony Stewart-owned oval founded by Earl Baltes.

The $100,000-to-win Dream XIV and the 43rd annual World 100 will be expanded to three days of racing each and a total of nearly $200,000 has been added to the purses for the crown jewel events. In addition, two more starters have been added to each lineup for the 100-lap features.

While Eldora’s marquee Dirt Late Model races highlight the 2013 schedule, missing from the slate is the Prelude to the Dream, the charity all-star Dirt Late Model event featuring some of NASCAR’s biggest stars. The track cited logistics from the Dream expansion from keeping the race on the calendar, but said that advance ticket-holders for the event will retain renewal rights for the next scheduled Prelude.

The Dream is scheduled for June 6-8 while the World 100 is Sept. 5-7, its traditional weekend following Labor Day. Each event will open with action on Thursday and Friday while Saturday’s traditional six heat races and consolation races will remain intact.

Tickets: Dream and World 100 tickets will cost the same as 2012, the track announced. For the first time, fans can renew seats and campsites in a single order using the track’s TicketForce online system. Renewal notices will be emailed Oct. 19; the renewal deadline is Nov. 16. For fans wanting to add Thursday or Friday tickets to a Saturday package, they can upgrade tickets tickets as soon as the renewal process begins. For complete ticket information, visit eldoraspeedway.com or call the ticket office (937) 338-3815.