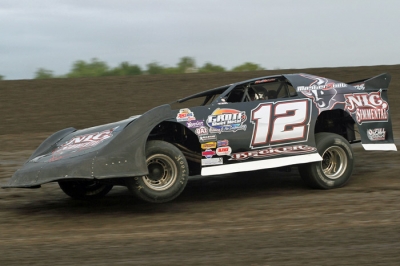 When engine problems in back-to-back events in late August knocked him out of the WISSOTA Late Model points lead, Chad Becker worried he was headed down an all too familiar road in the chase for the organization’s overall points championship.

After leading the WISSOTA standings well into the year in 2009 and 2010 only to have late-season issues prevent him from claiming the title, Becker of Aberdeen, S.D., vowed not to let the past repeat itself in 2012.

“At first, I was thinking here we go again,” said Becker, who lost the ’09 title to Jeff Wildung of Nassau, Minn., and the ’10 title to Ricky Weiss of Winnipeg, Manitoba. “But this year we were really confident. We’ve got good equipment and we were really good all year. I knew if we just went out and took care of business and put ourselves in the right position we could pull it out.”

Becker did indeed take care of business. He used consistent finishes throughout the final two months of the WISSOTA season and a victory at Casino Speedway in Watertown, S.D., in the final weekend of competition to jump David McDonald of Huron, S.D., and claim his first WISSOTA title by a single point.

“After those two bad nights, we had to play catch-up till the end. But we went and did what we had to,” said Becker, who also won track championships this season at Casino Speedway and Dakota State Fair Speedway in Huron. “I’ve been trying to win one of these for a while now and we finally got everything put together and got it done.”

While he would’ve like to have avoided the engine troubles, the set back definitely made things more exciting just when Becker appeared as though he may pull away with the points chase. A comfortable lead would’ve made things less stressful for Becker, but he actually enjoyed winning the championship in such a close battle.

“It was close, but sometimes it makes it more fun that way,” Becker said. “It could really get your stomach wound up, especially when you’re only a couple points away from each other the last couple months of the season. But it’s pretty special for it to come down to the end like that.”

The points battle also had some extra excitement because it came down to two drivers in Becker and McDonald who mostly compete the same tracks every week. On top of that, the two drivers are also good friends.

“David’s an awesome driver. We raced three nights against each other every week and raced each other clean,” Becker said. “It was stressful, but we get along really well. It helps a lot when you park beside each other at tracks and hang out and talk during the week. As nerve-wracking as it was, it was kinda cool that we were racing each other for it.”

After his near-misses in ’09 and ’10, Becker became accustomed to looking back at over his results at the end of each season and regretting missed opportunities that could have won him the title. He’s glad he won’t have to do that this year.

“That’s probably the best thing about it,” Becker said. “You definitely look back on that and think ‘ah, if I just had done better that one night or that one time when we spun out.’ At the end you look back a lot. It’s definitely a relief not to have that feeling this year.”