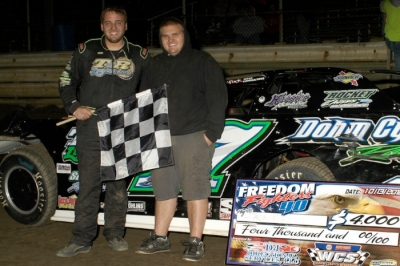 ORRVILLE, Ohio (Oct. 13) — Zack Dohm of Cross Lanes, W.Va., earned $4,000 Saturday evening at NAPA Wayne County Speedway for winning the Freedom Fighters 40. Dohm took the checkers ahead of ninth-starting Jared Miley of South Park, Pa., in a race sprinkled by rain most of the way. | Slideshow

Pole-starting Doug Drown of Wooster, Ohio, jumped to the early lead over Dohm, King, Barbara and Jared Hawkins as the frontrunners battled. Dohm was right on Drown on the eighth lap, and got a run down the backstretch a lap later to dive under Drown and take command.

Dohm stretched his lead while Senic, King and Hawkins battled for the second spot and Miley worked his way to the front.

The leader worked through lapped traffic, allowing Senic to close the gap while Miley moved past Hawkins and King to third. On lap 27, Miley powered past Senic to take the second spot while Dohm was out front by a straightaway margin.

Two cautions appeared for George Lee, erasing Dohm’s lead, but he kept Miley in check on the restart. The high-running Miley couldn’t unseat Dohm while the low-running Senic settled for third.