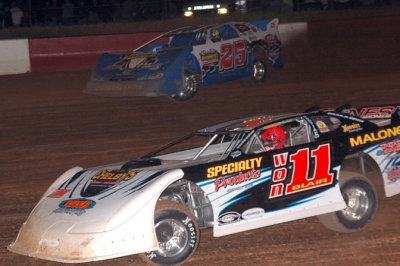 INDIANA, Pa. (April 27) — Rob Blair of Titusville, Pa., outdueled ninth-starting Josh Richards of Shinnston, W.Va., in the final laps of the Area 51 feature at Challenger Raceway for a victory in the first-ever event on the Unified Force Race Championship series. Blair, one of four leaders, overtook Richards for good with two laps remaining and earned $5,000 at the 4/10-mile oval. Richards, who led two for 13 laps driving the Ernie Davis-owned No. 25, settled for second ahead of two other leaders, Dave Hess Jr. of Waterford, Pa. (led laps 13-22) and polesitter David Scott of Garland, Pa. (led laps 1-5). Billy Drake of Bloomington, Ill., last year's $20,000 Fall Fest winner at Challenger, was fifth. | Slideshow

Scott took control early but Blair moved ahead on the sixth lap after a restart while the seventh-starting Hess headed for the front. Hess took second from Scott on the 10th lap, then took the point from Blair after a lap-12 restart. Now it was Richards on the move as he broke into the top five on the 14th lap and moved into the lead on lap 23.

The rest of the way was a Blair-Richards showdown as Blair went back ahead following a lap-31 caution and was out front at a lap-44 slowdown. Richards used his high groove to edge back ahead on lap 45, but Blair used a lower line to creep back out front the final two laps.