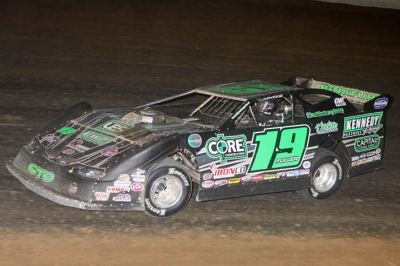 HESSTON, Pa. (Oct. 13) — Kennedy Motorsports took over title sponsorship of the United Late Model Series in 2012. And fittingly a driver for the John Kennedy-owned team broke through for victory lane in the tour’s biggest racing.

Taking the lead on a mid-race restart, Tim Fuller of Watertown, N.Y., earned $10,000 on Saturday at Hesston Speedway to capture the season-ending Ultimate, leaving early leader Jason Covert of York Haven, Pa., with a runner-up finish at the half-mile oval. | Slideshow

The sixth-starting Fuller notched his first 2012 Late Model victory of the season and first since joining Kennedy Motorsports and teammate Shane Clanton midway through the year.

Rich Gardner and Covert started on the front row of the 28-car field with Covert taking the early lead, reaching lapped traffic by the 14th lap with Hess, Gardner, Lathroum and Fuller in pursuit.

Gardner made a slick move around Hess to regain second on lap 15, then took the lead from Covert on lap 20 with Hess going to second a lap later.

Going down the backstretch on lap 21, Gardner and the lapped car of Greg Fetters became locked after making contact. Hess hit the duo going full speed, sending Gardner high upon the wall and across the track. Gardner and Hess were eliminated.

Covert resumed command with Fuller up to second, and three laps later another yellow appeared for a slowing Jerry Bard. On the restart, Fuller outraced him into turn one to take the lead with Lathroum, Yoder and 12th-starting Mason Zeigler in pursuit.

Fuller stretched his lead over Covert, Lathroum and Yoder while Scott LeBarron moved around Zeigler for fifth on lap 32, and Eckert overtaking Ziegler four laps later. Eckert moved into the top five on lap 45 while Yoder claimed third from Lathroum on lap 56 during a long green-flag stretch of racing.

Fuller raced into lapped traffic in the final laps, allowing the others to close, but remained in control to complete the victory.