Kirkpatrick survives for victory at Marysville 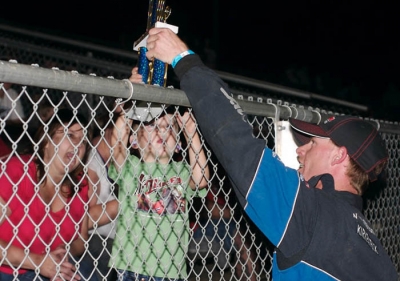 MARYSVILLE, Calif. (April 26) — In a rough and tumble series debut at Marysville Raceway Park, A.J. Kirkpatrick of Castroville, Calif., fought off several challenges in earning a $3,000 Western Allstars Super Late Model Series victory. Kirkpatrick was out front at the finish as only seven of 22 starters were still running when the checkered flag flew on his first-ever series triumph. | Slideshow

Chet Buckley of Lompoc, Calif., finished second in a tight battle among pursuers Ron Bartels of El Segundo, Calif., local driver Jerry Bartlett of Yuba City, Calif., and Chris Shannon of Merced, Calif., at the quarter-mile oval north of Sacramento. Series points leader Bobby Hogge IV of Salinas, Calif., and Shannon were the earliest challengers of the leading Kirkpatrick, closing in halfway through the 30-lapper. Hogge tried a high-side move and Shannon worked the low groove, but Gilbert Dixon's slower car got in the way, halting Hogge and Shannon in turn four and forcing them to restart on the tail. Kirkpatrick was in control the rest of the way and the final laps ran caution-free as the winner raised his hand in the air taking the checkered flag.

Notes: Kirkpatrick's winning car is sponsored by Pro Power Race Engines and Little Darlin's Childcare. ... A red flag appeared on the third lap when a crash that blocked turn one involved half the 22-car field. Hometown driver Leroy Perry appeared to get the worst of it. ... Bobby Hogge IV dropped out with mechanical problems after his mid-race accident. ... Fourth-finishing Jerry Bartlett is a three-time track champion. ... The series has a five-race month in May starting with the May 3 event at Kings Speedway in Hanford, Calif.