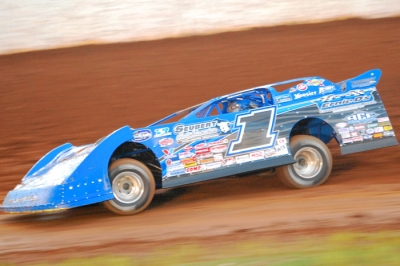 Josh Richards led 18 laps at Charlotte before a flat tire took him out. (Trax Racing Photos)

CONCORD, N.C. (Oct. 10) — When Josh Richards suffered a flat right-rear tire while leading Wednesday night’s Circle K Late Model Showdown at The Dirt Track at Charlotte, it brought back memories of another costly flat in his most recent appearance at the 4/10-mile oval.

Richards of Shinnston, W.Va., was headed for his second consecutive World of Outlaws Late Model Series championship in the national tour’s season-ending event during the second night of last year’s WoO World Finals when a flat right-rear tire on the final lap allowed Rick Eckert of York, Pa., to race by him and claim his first series title. | Eckert wins at Charlotte

Eckert again raced past the slowing Richards on Wednesday night, this time on his way to a $10,000 victory while Richards was once again left shaking his head after a heartbreaking night at Charlotte.

“It definitely brought back memories,” said Richards, who raced from eighth to first early in Wednesday’s 50-lapper and dominated until the lap-31 flat. “We had a brand new car and came here to win tonight. I was confident we could have got it done. It was just another one of those nights where I guess it just wasn’t meant to happen.”

It wasn’t just bad luck that took Richards out of Wednesday’s race. A rough-and-tumble track surface wreaked havoc on tires and equipment all night, eventually leading to just 10 of the race’s 26 starters finishing the main event.

Richards didn’t appear to be racing conservative either. His car was fast and he drove it hard, often bouncing off the track’s rough cushion. At one point, just a handful of laps before the flat tire, Richards’ car nearly went completely airborne when he hit the cushion awkwardly while trying to negotiate heavy lapped traffic in turns three and four. Richards slowed his pace considerably after the incident, but it proved to be too little too late.

“We’ve always been good here in those conditions. It’s just one of those things I’ve always felt comfortable with,” said Richards, who’s competing part time in his father Mark’s Rocket Chassis house car this season while also competing in the NASCAR Nationwide Series. “With the conditions like that here, like last year we were dominating a race like that. It’s just once you get in a rhythm, you can run smooth.

“You don’t feel like you’re killing everything. But you feel like if you slow down, then you don’t know where you’re at. You loose your rhythm and your train of thought. It just seemed like it was just easier to maintain that speed. To me, it wasn’t crazy fast.”

Richards won’t have to wait long to get his shot at redemption at Charlotte. After competing in the Dirt Track World Championship Oct. 19-20 at Portsmouth (Ohio) Raceway Park, he’ll return to Charlotte Nov. 1-3 for this year’s World Finals.

“We know we’ve got a fast car here, and I intend to race the World Finals,” Richards said. “We’ll be ready to come back, just hopefully things turn out a little better this time around.”

Making his first feature start since May’s Show-Me 100 at Lucas Oil Speedway in Wheatland, Mo., Eric Jacobsen of Seacliff Beach, Calif., had high hopes when he won his heat race Wednesday night at Charlotte and drew the fourth starting spot for the main event.

Unfortunately for Jacobsen, his lack of seat time this season caught up with him not long into the race when he got loose entering turn one on lap three and spun up the track. He survived the incident without damage but was never a factor the remainder of the event.

“That’s just lack of seat time,” Jacobsen said. “I made a mistake and got into (Jimmy) Owens, I think, a little bit and lost the steering wheel. I tried to make up for it on the next lap and about rolled down here in turn one.”

Even with the mistake, Jacobsen was pleased with his overall performance.

“It’s just a process. I think the last main event I was in was the Show-Me 100,” said Jacobsen, who plans to return to Charlotte for the World Finals. “To be able to come and qualify good and win a heat race here with this crowd is a step in right direction. That’s just mistakes out there. Gotta knock the rust off.”

Jacobsen’s rust behind the wheel is a product of taking time off to spend time with family. With a young son at home, Jacobsen hasn’t raced much in 2012. But he hopes to be able to bring his son on the road with him some in 2013, allowing him to race more often.

“It’s just life changes,” Jacobsen said. I’ve got a 2-year-old at home and priorities change. I really enjoy being a father. Hopefully I can get him out here some next year and start racing again.”

Eric Jacobsen wasn’t the only surprise heat race winner. Eric Wells, who has never been particularly strong at Charlotte, also won his heat race and drew the pole in the redraw.

Unfortunately for Wells, his time near the front didn’t last very long either.

The Hazard, Ky., driver was running among the top five when Tim Fuller had left-rear wheel issues directly in front of him. With nowhere to go, Wells’ car plowed into the back of Fuller, ending the race for both drivers.

“His tire came off and I was committed there,” Wells said. “There wasn’t anywhere to go in that deal.”

Even with the disappointment, Wells leaves Charlotte looking forward to returning for the World Finals.

“I’ve really not ran good here in the past,” Wells said. “We’ve only made a couple features coming down here for the last four years. We were good tonight, so I’m looking forward to coming back. It’s exciting coming back, so we’ll see what happens.”