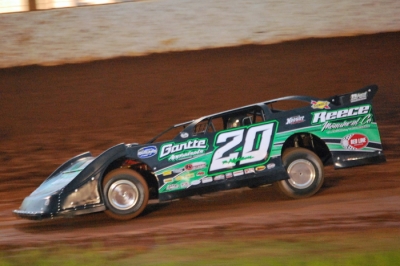 Jimmy Owens gets up to speed in a new Barry Wright Race Car. (Trax Racing Photos)

CONCORD, N.C. (Oct. 10) — More than six months after news broke that he had added a Barry Wright Race Car to his arsenal of Bloomquist Race Cars, Jimmy Owens finally made his long-awaited debut in his new car during Wednesday’s Circle K World of Outlaws Late Model Showdown at The Dirt Track at Charlotte.

After a quick hot lap session, Owens qualified fifth out of the race’s 45 entries and battled a tight race car in finishing second to fast qualifier Josh Richards of Shinnston, W.Va., in his heat race. He started third in the 50-lap main event, but his race was cut short by suspension woes just two laps into the race.

“We qualified pretty good with it and ran OK in the heat race,” Owens said of his first showing in the new car. “Maybe we was gonna run good in the feature, but who knows?”

The new car’s initial outing wasn’t all smooth sailing. While he was able to turn back challenges from Barry Wright house car driver Steve Francis of Ashland, Ky. and eventual main event winner Rick Eckert of York, Pa., to hold on to second in his heat, Owens was noticeably shaky early in the 10-lap prelim and fell more than a straightway behind Richards.

“It’s not really a whole new learning process because it’s a race car, but we’ve ran our Bloomquist cars so long we’re comfortable with them,” said Owens, who has driven Bloomquist cars for car owner Mike Reece since 2007. “There’s quite a bit of difference between them.

“We know the does and don'ts in (the Bloomquist cars). In something new, you’ve gotta learn the dos and don’ts, and we learned a few don’ts tonight. It’s just part of a process with a new car, finding out what it likes and what it doesn’t like.”

As he said when he first got the Barry Wright car, Owens doesn’t have any plans of moving away from Bloomquist cars. In fact, he’s committed to sticking with Bloomquist Race Cars as his primary chassis brand for the foreseeable future.

“We’ll just run it whenever, probably some local shows around home and stuff like that,” Owens said of the Barry Wright car. “We’ll be in the Bloomquist cars pretty much. That’s what we’re gonna run. Those are our cars. We’ve just got this and we can race at different places and not worry about tearing our other cars up.”

Owens said he isn’t sure when he’ll run the Barry Wright car next, but it most likely won’t be during Charlotte’s Peak Motor Oil WoO World Finals Nov. 1-3. After all, he’s had pretty good luck at Charlotte in his Bloomquist car, winning on the final night of the World Finals in each of the past three years.

“We’ve won three in a row with a Bloomquist car,” Owens said. “It’d be pretty dumb not to come back in one of them.”