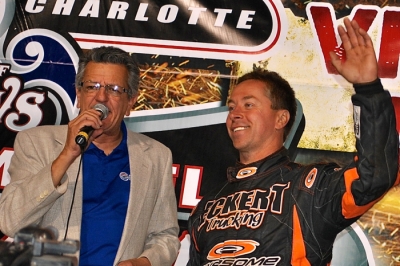 The defending World of Outlaws Late Model Series champion streaked into the lead on lap 31 when Josh Richards of Shinnston, W.Va., slowed with a blown right-rear tire and never looked back. He kept Clint Smith of Senoia, Ga., at arm’s length over the remaining distance to register his second consecutive and fifth overall triumph of 2012 on the national tour. | Slideshow | Sidebar | Video

“We won Charlotte!” exclaimed the 46-year-old Eckert after emerging from his victorious Team Zero by Bloomquist car. “It’s a great feeling because this is an awesome place. We’ve been here a bunch (over the past decade) and we’ve run second, we’ve run third, we’ve run fourth – and we’ve run terrible here too. I’ve always wanted to win here, so now I can take this place off my bucket list.”

Smith, 47, finished 0.725 of a second behind Eckert in second place – after starting 24th because he used a provisional spot to gain entry to the main event. It was the third runner-up placing of 2012 for Smith, whose last WoO victory came 61 races ago on May 8, 2011, at Needmore Speedway in Norman Park, Ga.

Chub Frank, 50, of Bear Lake, Pa., quietly moved forward from the 11th starting spot to finish third, his 10th top-five outing of 2012. He moved to fourth in the WoO points standings, overtaking Tim McCreadie of Watertown, N.Y., who started sixth but retired after just nine laps.

Bub McCool of Vicksburg, Miss., advanced from the 21st starting spot to add a fourth-place finish to his 2012 WoO Rookie of the Year campaign, and points leader Darrell Lanigan of Union, Ky., salvaged a rare off night (he used a provisional to start 23rd in the A-Main) with a fifth-place run that marked his 31st top-five finish in 38 starts this season.

Lanigan, 42, left Charlotte leading the WoO points standings by 194 points over Eckert. He will officially clinch his second career championship when he enters the qualifying program of the Peak Motor Oil World of Outlaws World Finals presented by NAPA Auto Parts on Nov. 1 at The Dirt Track, assuring himself 60 show-up points for each of the event’s two shows.

Eckert will lock up second place in the ’12 points standings on qualifying night of the Peak World Finals as well, allowing him to focus on extending his season-ending win streak. With a sweep of the two-feature extravaganza, he would match his personal-best standard of four consecutive WoO victories in 2006.

Eckert’s first-ever checkered flag at The Dirt Track came after he vaulted from the ninth starting spot to third in just two laps. He took second on lap 13 when Dale McDowell of Chickamauga, Ga., who led the race’s first 12 laps from the outside pole, lost momentum as Richards sailed into the top spot.

For the next 18 circuits Eckert chased Richards, who had run the rough-and-tumble track’s ragged edge to advance from the eighth starting spot and continued to charge hard once in command. Richards’s bid for a fourth consecutive victory in the Circle K WoO LM Showdown effectively ended, however, when he slowed with a flat right-rear tire on lap 31, leaving Eckert in front for good.

Richards returned to the track after getting a new tire, but he retired two circuits later after tangling with Steve Francis of Ashland, Ky. McDowell, who drove NASCAR Camping World Truck Series driver Ty Dillon’s No. 41 after parking his own Team Dillon No. 17M following time trials, also did not finish the race, retiring on lap 16 after bringing out a caution flag.

“I got up through there fairly well without hurting my tires, but when I got (to third) Josh was rolling and Dale was rolling,” said Eckert, whose 29th career WoO win moved him into sole possession of third place on the tour’s victory list since 2004. “Then those two touched each other (in turn one on lap 13) and I snuck by Dale, and then I just got to where I started creeping back in on Josh when we ran a long enough green. On those short greens he was like a rabbit – he’d get out there – but once we got going I finally could change my line into three and I started moving in on him.

Eckert, whose night began in difficult fashion when his car’s lift bar dug into the track during hot laps and caused its driveshaft to break, survived a final caution flag on lap 48 (for a blown right-rear tire on the third-place car of Richards’s Rocket Chassis teammate Brandon Sheppard of New Berlin, Ill.) to pocket a $10,650 paycheck.

Smith, who steered his Rocket car into second place on a lap-33 restart, wasn’t able to offer Eckert a serious challenge. But the veteran driver was pleased with his unexpectedly strong performance.

“We broke a shock in hot laps and a shock in qualifying and then folded the nose in the heat,” said Smith, who dropped out of his heat race when the nosepiece damage caused its mount to break off the car’s frame. “I guess I got all three of my breakages out of the way before the feature.

“We spent the whole time (between the heats and the A-Main) getting the nosepiece back welded on the car, and we just set it up baja-style just to try to keep (the car) on the ground with the rough track. I told (his crew) I was just gonna try to ride around (starting deep in the field), but I moved up top to try it and about four boulders (of clay) about knocked my head off so I said, ‘The heck with this. I’m gonna move to the bottom.’

“I married myself to the bottom after that,” he continued, “and fortunately, every restart they lined up me up on the bottom and I’d get me about one or two cars on the straightaway. Next thing you know, I’m up there in second.

“As the end the bottom got good and I thought I had something for Eckert. I drove up there too him, but then (Pa) Doar was running around there slow and I had to jump up there to get around him and I lost about a half-straightaway in one lap. We didn’t really have anything left after that last restart either.”

Ten cars were running at the finish of the race, which was slowed by seven caution flags. Forty-five cars were signed in for the event, which was run on a gorgeous autumn day. Richards was quickest in Ohlins Shocks Time Trials with a lap of 14.997 seconds. It was his third WoO LMS fast-time honor of 2012 and the 30th of his career.

The WoO LMS will return to Charlotte to end the 2012 season on Nov. 1-3 with the Peak Motor Oil World of Outlaws World Finals presented by NAPA Auto Parts.