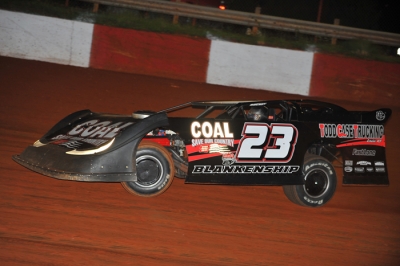 ROME, Ga. (Oct. 6) — John Blankenship has had moments this season where nobody could touch him. He had another one of those moments Sunday night at Rome Speedway.

Advancing from his seventh starting spot, Blankenship of Williamson, W.Va., rocketed from fourth to first during a two-lap span midway through the half-mile oval’s Rome Rumble and dominated the second half of the 50-lap race to earn a $10,000 victory sanctioned by the Lucas Oil Late Model Dirt Series. | Video | Slideshow

“It would be nice if we could be this good all the time,” said Blankenship, who recorded his third Lucas Oil Series victory of the season. “I didn’t think I had a shot at all after I saw who was lining up in front of me. But we just made a bunch of changes to the car and picked the right rubber. It all worked out.”

After advancing to fourth by lap five, Blankenship rode behind second- and third-running Scott Bloomquist of Mooresburg, Tenn., and Chris Madden of Gray Court, S.C., for much of the race’s early portions. But as the trio of cars began to catch polesitter Jimmy Owens of Newport, Tenn., in traffic, Blankenship turned up the heat, slicing through Madden and Bloomquist on lap 19, then taking the lead from the fading Owens on lap 21.

“I knew I was gonna be able to pass them. I was just gonna have to wait it out and just wait for the right opportunity,” Blankenship said. “When they started getting mixed up with the lapped cars and started dicing around, I decided to go for it then.

Blankenship survived a few close calls in traffic late in the race to cross the finish line with a nearly four-second lead. Bloomquist pulled ahead of Madden late to score the runner-up finish while Madden settled for third ahead of Steve Francis of Ashland, Ky., and Don O’Neal of Martinsville, Ind.

The race’s only caution appeared one lap after Blankenship took the lead when Owens slowed with a flat right-rear tire. Owens, who already wrapped up his second straight Lucas Oil Series championship, ended up 14th in the final rundown after leading the race’s first 21 laps.

Blankenship’s quick ascension from fourth to first ended what was shaping up to be an interesting three-car battle for the lead as the side-by-side duo of Bloomquist and Madden closed in on Owens in traffic.

“It was getting ready to get juicy there for a little while,” Bloomquist said. “It was gonna be an interesting race just amongst the three of us, but then he come in and put the spoil on it.”

Bloomquist felt that Blankenship’s performance might have been aided by his choice in tires. Blankenship was one of the few competitors running tires produced by American Racer Racing Tires.

Correction: Moves Pearson and Heitt to 10th and 11th in finishing order.