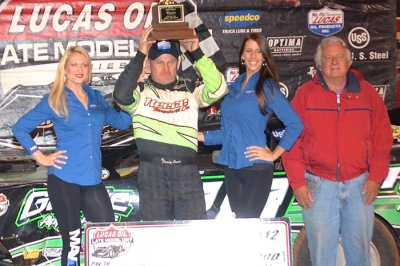 WOODSTOCK, Ga. (Oct. 6) — Compared to last year’s Lucas Oil Late Model Series events at Dixie Speedway and Rome Speedway, this weekend’s Georgia doubleheader for the national tour might as well be a vacation for Jimmy Owens.

Owens, the Newport, Tenn., driver who will soon wrap up his second consecutive Lucas Oil championship, raced under the most strenuous pressure he’s ever faced during last year’s Lucas Oil events at Dixie and Rome as he sought to unseat three-time series champion Scott Bloomquist of Mooresburg, Tenn., in a back-and-forth point battle that came down to the tour’s final race. | Owens wins Dixie Shootout

With a nearly 400-point lead entering this weekend’s events, which once again lead into the tour’s season finale at the $50,000-to-win Dirt Track World Championship at Portsmouth (Ohio) Raceway Park, the pressure Owens faces in in Georgia this year is at minimal best.

That was clear Saturday night when Owens tore through the field during Dixie’s 50-lap feature event, advancing from his 13th starting spot to claim his sixth Lucas Oil Series victory of the season.

“It’s definitely a lot more relaxed down here this year,” Owens said following his $10,000 victory Saturday night. “Battling with Scott and all the attention from the fans and the media and everybody, it was really a headache. It was really stressful. I tried not to worry about, but you had to hear about it every time you turned around. I was glad to be in that spot, but I hated to be in that spot.”

The comfortable points lead worked in Owens’ favor Saturday night. After a subpar qualifying and heat race effort, Owens used his mid-pack starting spot as a chance to gamble on his car setup, a move he would never have considered at Dixie last season.

“Tonight we changed some things because we really didn’t have nothing to lose,” Owens said. “We could kinda gamble. The guys threw some things on the car and it worked well for us. When you’re racing for points and have to be more conservative, you might not try something like that.”

The lack of a points chase isn’t just a luxury that Owens is enjoying. The crew members on his Mike Reece-owned race team are also feeling less pressure with the points wrapped up.

“They’re a lot more relaxed,” Owens said. “Those guys, they do a great job and they do their job and do it well no matter what the situation. They’ve got a good routine and get everything done the right way, but I’m sure it’s a little easier on them not to have that pressure hanging over them.”

Much like he did Saturday night, Owens will be squarely focused on winning when the Lucas Oil tour moves to Rome on Sunday and wraps up its season at the DTWC Oct. 19-20. With six Lucas Oil wins already to his credit, he’d like to tie his mark of eight wins on the series last year.

“We have a lot of seconds and a lot of near wins. We were just so close to having our best year ever if we could’ve won a few more races,” Owens said. “Our goal the rest of the year is to win every race. With the points not an issue, we can go out and race to win every night. That’s a pretty good feeling.”