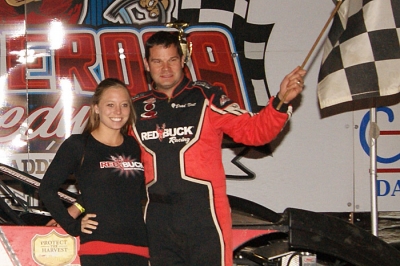 Neat, who started sixth at the 3/8-mile oval, earned $5,000 in becoming the fourth repeat winner of the event.

Linville settled for second while Justin Rattliff of Campbellsville, Ky., was third. Stephen Breeding of Isom, Ky., and D.J. Wells of Hazard, Ky., rounded out the top five finishers.

Linville led from the outset, pulling away early and entering lapped traffic after just nine circuits while Rattliff and Dustin Neat, the winner’s older brother, battled for second.

The elder Neat caught Linville by lap 22 while the younger Neat was up to third at the halfway point of the 50-lap feature.

The first of two caution flags waved on lap 32 when Michael England, Tommy Gregory and Jerry Rutherford tangled in turn three just in front of the leaders. Linville and Dustin Neat slid into the ruckus after the caution had been called, and officials restored their positions.

Brad Neat squeezed past his brother Dustin just before a lap-35 caution, and the elder Neat pulled to the pits during the yellow.

Brad Neat went to work on Linville as the frontrunners battled side-by-side beginning on lap 40 with Neat edging ahead for good on lap 45. Neat scooted away in the closing laps to wrap up tdhe victory.