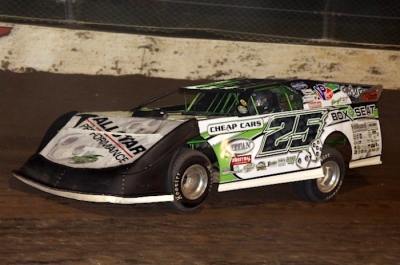 The 34-year-old driver from Bloomington, Ill., used the broom to sweep the day-long action at the Big E as he set fast time, took the Race of Champions, won his heat race, then dominated the 40-lap feature for a $5,000 payday. | Video | Slideshow

The pole-starting Feger notched his eighth victory of the season paying at least $5,000 in a race slowed by two cautions as second- and third-starting Dennis Erb Jr. and Matt Miller suffered flat tires.

Seventh-starting Wayne Chinn of Bradford, Ohio, scored a second-place finish while 13th-starting Brian Shirley of Chatham, Ill., at Eldora to celebrate his UMP weekly crown, was third. Andrew Reaume of Blenheim, Ontario, advanced four spots to finish fourth and Jeep Van Wormer of Pinconning, Mich., rounded out the top five in the race that served as the Sunoco American Late Model Series finale.

Feger held off the charge of Chinn, whose No. 1 worked its way into the second spot.

“I kept looking up at the scoreboard and was wondering who the No. 1 car was behind me, because there were a few of them out there,” Feger said. "During the double-file start I saw it was Wayne, so I knew he must have been doing pretty good.

“I was trying to be as good and smooth as I could. ... Thanks to Feger Nation and to all the fans for braving the cold, the rain and for the ones who are still here for sticking it out. We couldn’t do it without them.”

Feger tripped the clock with 15.6-second laps in high-speed action at Eldora.

“Any time you stand in victory lane at Eldora it’s a good thing,” Feger said after his Race of Champions victory. “I felt like I was driving a sprint car we were going around there so fast.”

The race was originally scheduled for Friday and Saturday, but rain scrapped the first day of action, forcing a one-day program that lasted until the wee hours. Nick Hoffman won the modified feature for a division that drew 130 cars.