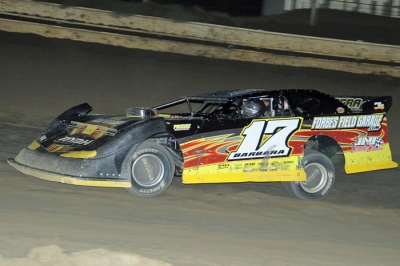 Barbara survived an overheating car to earn $3,000 for the victory over Chub Frank of Bear Lake, Pa., who held off 20th-starting Jared Hawkins of Fairmont, W.Va., for the runner-up spot. ULMS points leader Boom Briggs of Bear Lake was fourth and Dave Hess Jr. of Waterford, Pa., rounded out the top five in a race that wrapped up the track’s 83rd season. | Slideshow

“I was overheating so much and was just peddling it the last seven laps,” Barbara said. “I was going to pull off because the three grand doesn’t pay my motor expenses, but I’m glad I stayed out. You guys kept working on the track all night and it turned out pretty good at the end there.”

Barbara took the early lead with Rich Gardner, Briggs, Hess and Doug Eck in tow. After a lap-three caution for Doug Drown, who jumped the cushion and found the turn-four wall, Hess moved up to second on the restart.

Barbara opened up a half-straightaway lead before catching lapped traffic on lap eight.ï¿½ Hess was able to run down Barbara and was right on the leader on lap 13, before Jared Miley and Ken Schaltenbrand tangled in turn four to bring out the second caution.

Hess jumped the cushion on the restart, allowing Gardner back by with the eighth-starting Frank up to third. Briggs and Hawkins were also able to get by for fourth and fifth before Garrett Krummert spun to bring out the caution with 13 laps scored.

Hawkins continued his progression forward taking fourth from Briggs in turn two on lap 14, while Frank passed Gardner for second. The battle then focused on the third position as Gardner tried to fend off Hawkins and Briggs.

Meanwhile, Frank began to close in on Barbara with 10 laps to go. Hawkins put a slider on Gardner in turn four on lap 23 to take third just as Gardner got into the fence, drawing the race’s final caution.

It was under caution that Barbara showed signs of smoke and contemplated exiting the event, but he ran the final seven nonstop laps uncontested to win by 1.029 seconds.

Notes: Barbara drives a MasterSbilt Race Car by Huey powered by a Domhoff Race Engine and sponsored by Forbes Field Garage, Ran Group, Triangle Benefit Servies, JNJ Media, Potoka Trucking Bud’s Place and Brian’s Painting. ... The victory was Barbara’s fifth overall of the season. ... Barbara is the 105th Super Late Model winner in Sharon history. ... Third-finishing Jared Hawkins got to the speedway late and missed hot laps. He was caught up in a first-lap accident in his heat race and started on the tail of his consolation race. ... The race was the 404th Super Late Model event in track history. ... Points leader Boom Briggs can clinch the title by finishing 16th or better in the next event. ... Engine problems forced ULMS rookie Billy Dixon to scratch from the feature. ... Drivers failing to make feature lineup: Tom Shaffer, Damon Haught, Chris Schneider, Dick Barton and Tyler Dietz. ... The race was a makeup of an April rainout. ... ULMS wraps up the season with a pair of events Oct. 12-13 at Hesston (Pa.) Speedway, including the $10,000-to-win Ultimate.